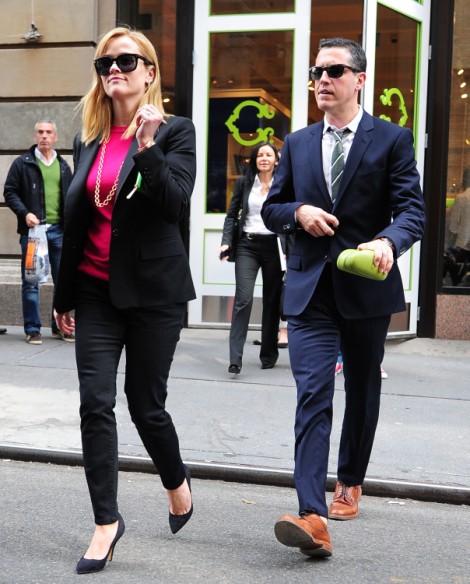 Oh, but this isn’t the face of a corrupted woman, is it? Reese Witherspoon will forever be made of stars and rainbows which is why her popularity soared even after tape surfaced of her being an insufferable belligerent drunk. Why blame her for her actions? Let’s blame her skeezy manager husband instead!

That seems to be the angle Star magazine took this week. The mag managed to rustle up Jim Toth’s ex to dish the dirt on the Hollywood player before he married America’s Sweetheart. Sadly, the reviews aren’t great for Reese Witherspoon’s husband. The ex, who refused to be named, claimed that Toth is a nasty old drunk who threw lavish parties in his mansion to get low level actresses to sleep with him. He even had a closet of bikinis to entice women to get more comfortable around the pool. Sounds like any other day for a Hollywood agent, right?

“He used to drunk dial me all the time. If I didn’t pick him up, the next day he’d call me and tell me that if he had driven home drunk he could’ve killed someone. Last time I checked, he was a 30-something man who had enough money to call a car service. Jim is a manipulative snake with no respect for others’ well-being. This incident with the arrest is the exact Jim I knew,” the source said.

She also claims Jim’s issues will only drag Reese down further. I don’t know… I’d say that video was pretty damn low.

So I have to tell myself that this is Star and an unnamed source is always a little sketchy but you want to believe it, right? There’s something about this dude that does come across a little smarmy. And let me say, I have no facts. He just looks like a jackhole all the time which is enough evidence for me I guess. Still… I’m not the chick who’s going to point the finger at the dude as the bad influence. There have been rumors that Reese Witherspoon was a nasty little biotch for years. The public just finally got to see it. Sadly, the public didn’t care. Sweet Home Alabama is just too damn good of a movie.

What do you think? Will a drunk Jim Toth ruin Reese’s career or will Reese’s true personality do it for her?