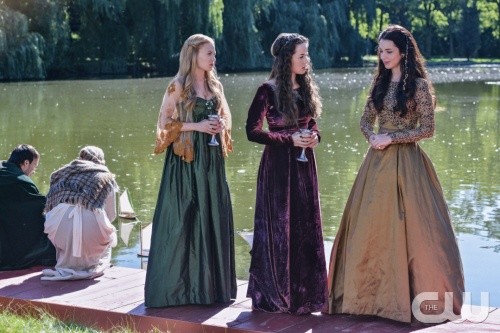 Tonight on the CW their new drama REIGN airs with a new episode called, “A Chill in the Air.”  On tonight’s show Francis reunites with an ex, causing Mary to turn to Bash. Alan Van Sprang.  Did you watch last week’s episode? We did and we recapped it right here for you.

On last week’s show Mary has to decided if she was willing to lie and sentence a man to death in order to have King Henry let her out of her engagement to Prince Francis.

On tonight’s show when Olivia (guest star Yael Grobglas), who is an ex-lover of Francis’ (Toby Regbo), arrives at the castle, she brings the dangers of the woods with her. Mary (Adelaide Kane) seeks comfort in Bash (Torrance Coombs). Bash is threatened by heretics for interfering with a sacred blood rite. Meanwhile, Aylee (Jenessa Grant) is forced to spy on Mary when Queen Catherine (Megan Follows) blackmails her. Alan Van Sprang, Anna Popplewell, Celina Sinden and Caitlin Stasey also star. Bruce McDonald directed the episode written by Jennie Snyder Urman.

Reign Season 1 episode 5 “A Chill in the Air” airs at 9PM tonight on the CW and we will be blogging it will all the up-to-the-minutes. So come back to this spot and spend the evening with us enjoying the show! Make sure to refresh often to get the most current update!

Tonight’s episode of Reign opens with a man driving a carriage with two women in it. A boy runs into the road and stops him, he tells him the bridge is out, and they must take an alternate route through the woods. It is a trap. The driver and one of the women are murdered by a man we never see. The blond woman is able to escape unharmed.

Francis and Mary are at the castle, discussing politics. Mary says she doesn’t want to talk about politics, she wants to talk about them. Francis declares to Mary that he is “hers, and only hers.”

The blond woman is still staggering through the woods, from the unknown assailant.

Mary and her ladies in waiting are out in town, Bash approaches Mary and flirts with her. Her friends make a huge fuss about Bash liking her, but Mary is convinced that he just flirts with everyone. Greer is busy looking for another potential suitor, seeing as how everything with Thomas fell through. Even though she obviously has feelings for the servant she has been seeing, she is still determined to wed into a wealthy family.

Francis surprises Mary at the market with a toy sailboat he has made. Their moment is interrupted when the blond woman from the woods runs into the market disheveled. Francis runs over to her and comforts her, leaving Mary high and dry. Bash explains to Mary that the blond woman, is Olivia, and she was in a relationship with Francis a few months before Mary arrived.

Francis takes Olivia to the castle and sets her up in a room. He questions her about what happened in the woods. She doesn’t know much, the bandits were speaking in a foreign tongue. Francis wants to know why Olivia has returned, she had left to marry someone else. She reveals that her husband found out she was intimate with Francis and left her.

Francis pays Mary a visit and explains that he used to be involved with Olivia. He apologizes that his “past has come back,” but insists it is in the past. He does however feel like he has to help Olivia find a new husband, since the previous one fell through because of him.

Mary feels bad for Olivia, and invites her to sit with her and her ladies in waiting. She even offers to loan her a dress for the Harvest Festival.

Bash and Francis are discussing Olivia’s carriage accident. He thinks she was attacked by Pagans.

The Queen runs into Aylee in the hallway, and realizes she has Mary’s ring. She confesses to Queen Catherine that she stole it, sometimes she steals things to make her feel better. The Queen takes the ring and says she is going to think about whether or not she will tell Mary.

Bash and Francis investigate Olivia’s carriage accident. They find her driver and friend hanging upside down from the trees, bleeding out. The driver is still breathing, so Bash cuts him down to save him.

Mary and Olivia are having a heart-to-heart. Olivia reveals that Francis used to tell her that he was going to marry her, and that they were truly in love. Mary is irate. She can’t believe that Francis would consider marrying someone else, since they have been engaged since they were eight. Olivia reveals that she is going to present herself as an option to Francis, he will have to choose between the two of them.

Nostradamus is fixing up the carriage driver that Bash brought back form the woods. Nostradamus reveals that Bash could have been killed bringing back the body, because he interrupted a human sacrifice. He warns Bash to stay close to the castle, he is in danger, and the Pagans will be out to get them.

Olivia cuts through the kitchen and asks a server for directions. The servant is the same man that ran out in the road and told the driver of her carriage to cut through the woods. Olivia never seen him because she was inside the carriage, but his voice sounds familiar to her. She can’t remember where she has heard it.

Mary is questioning Francis about his intentions to marry Olivia. He says they only discussed it once, and admits he got “caught up” with her. Francis guarantees Mary he is committed to her now. Mary reveals to Francis that she has arranged for Olivia to stay in Paris.

The Queen is talking to Aylee in her room. She wants Aylee to bring her Mary’s letters to her mother, before she mails them, so she can read them. If Aylee doesn’t bring her the letters, she will tell Mary that Aylee stole from her.

Olivia pays Francis a visit, she wants him to have a drink of wine with her. Francis reveals to Olivia that he has made arrangements for her to stay in Paris. Olivia is upset, she doesn’t want to go. She reveals that she still has feelings for Francis, but he tells her that he is engaged to Mary and that isn’t going to change. She begs him to let her stay as his mistress, and then kisses him.

Kenna tells Mary that Olivia is staying, the servants are unpacking her bags in the West Wing. Mary doesn’t believe it, she thinks it is a mistake. Kenna leaves, and Queen Catherine, approaches Mary. She reveals to her that Kenna is sleeping with the King, Mary is shocked, and she had no idea.

Nostradamus tells Bash that the driver of the carriage has died. But before he died he told Nostradamus he heard the Pagans talking about using his blood for a sacrifice that was related to a creature that lives in a secret cave in the woods.

Mary calls Kenna out and asks her if she is having an affair with the King. Kenna confesses and reveals that the King has asked her to be his official Mistress, which means she no longer has to take orders from Mary.

Francis rushes to tell Mary that Olivia is moving into the castle before someone else tells her, but he is too late. He lies to her and said that the family in Paris learned of her reputation and changed their minds about her staying with them, but in actuality he made the whole thing up because he wants her to stay and become his Mistress. Francis confesses that something happened between them, but he stopped it. Mary is furious, she demands Olivia leaves, and Francis tells her that she is staying. He also reminds her that there is nothing she can do about it because he is the future King.

Mary goes for a walk and runs into Bash. She sits down and drinks with him, and gets clearly drunk. She rambles about her drama with Francis, and Bash hangs on to every word. Then…she kisses Bash. Francis goes looking for Mary to apologize to her, but instead finds her kissing his brother.

Mary tries to apologize to Francis about fighting with him, she has no idea that he seen her kissing Bash. He is very cold to her, and walks off with Olivia.

The Queen and Olivia are speaking behind closed doors. It is revealed that The Queen sent for Olivia, and brought her to France to break up Francis and Mary. The Queen wants Olivia to get pregnant, so Francis will marry her, and she won’t have to deal with Mary anymore.

Mary isn’t as dumb as the Queen thinks though, she is holding a secret meeting with Aylee. Apparently Aylee fessed up about stealing her ring, and the two have been conspiring together to give the Queen fake letters. And, Mary has figured out that the Queen sent for Olivia.

The Pagan servant pays Bash a visit, he tells Bash that he owes them a sacrifice. If he doesn’t bring them a person to sacrifice, then they will choose a person for him. He tells Bash not to be afraid, it is a privilege to be sacrificed, and then the crazy Pagan jumps off the castle wall to his death.