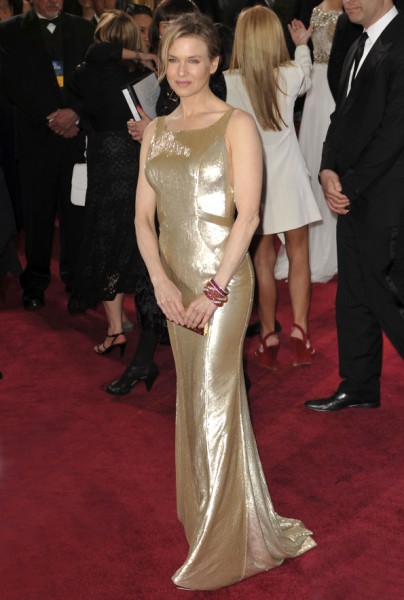 Was Renee Zellweger drunk last night at the Oscars? That seems to be the question everyone’s asking this morning and it pains my heart. I love me some Renee. She’s Bridget Jones. She’s an Oscar winner for Christ’s sakes! Why can’t she just keep her shit together for one night when she knows she has to present in front of millions of people?

What do you think? Was she just a little too squinty-eyed when she got up there with Richard Gere, Queen Latifah and Catherine Zeta-Jones? I don’t remember thinking it at the time but now that you all point it out…. But you have to remember, Renee can be an odd bird. She’s super shy and awkward and never looks comfortable in her body which is a shame since she runs it ragged to keep it so svelte. So I think I just laughed off her appearance as just typical Renee. But a lot of you didn’t and I understand why. How can you look so uncomfortable standing next to Richard Gere? He’s so adorable and sweet! Grab his ass or something! Make the audience less bored by the ten year anniversary tribute to Chicago. Did there really need to be that little tribute? Maybe all that botox was holding her back. The only thing mentioned more than the drunk theory was the botox theory. She didn’t look that tight and red, did she? I’m such a Renee apologist!

Let’s get to the dress. The body was out of control. That’s a given. The dress was Carolina Herrera. It’s her go-to but I was shocked to read that. It doesn’t feel like Carolina Herrera to me. It’s… OK. It doesn’t suck as much as Aniston’s but it’s not great either which is weird since Renee is such a fashion girl. Do you think the Renee Zellweger Oscars appearance was half-assed? Maybe she was just worried about the whole Bradley Cooper situation? See? I can’t help it. I’m a Renee apologist!