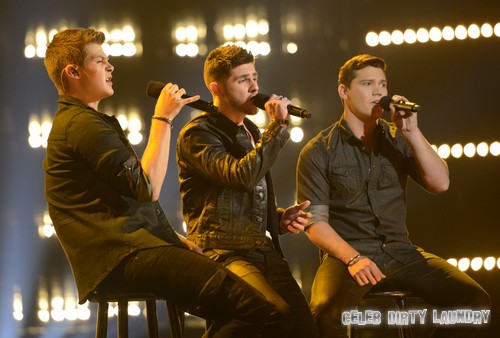 Restless Road took the stage  on THE X FACTOR USA for their Top 4 live performance to sing the song fans picked for them.  From team Simon Cowell, Restless Road sang “That’s My Kind of Night”  by Luke Bryan. On tonight’s show the top 4 performed live in front of coaches Simon Cowell, Kelly Rowland, Demi Lovato and Paulina Rubio for America’s vote and to make it to the coveted “Top 3 Finale.”  Did you watch tonight’s performance show? We did and we recapped it here for you.

Judges’ comments: “Kelly says it was so much fun to watch and that the style of the song is absolutely what they have to do on their album, Demi says that it didn’t do it for her; she said it was fun but felt it was awkward because they have to open much more. Paulina says she likes the way they sing but Colton is the main piece of it all and that Zach and Andrew need to both be more open. Simon says that the song was brilliant and that they deserve to be where they are.”

If you want Restless Road to stay around another week you have to vote for them.  Right now it is anyone’s game and it is the last chance for the acts to impress.

On last week’s show Restless Road performed “Wake Me up”  by Avicii and the judges had this to say about it, “Kelly says that she loved how each one of them left their hearts on that stage; it was truly beautifully and it was a great performance. Demi says they made her cry; she is really proud of how beautiful that song was. Paulina says that she is proud that they are here. Simon says that this is what he always hoped where they would end up being; they have come such a long way and is incredibly proud of them and would buy that song in a heartbeat. If you want to see Restless Road make it another week, you have to vote for them.“

On Thursday, December 12th, 2013 result show one last act will be eliminated and the remaining 3 acts will be headed to the finale. Jennifer Nettles and Enrique Iglesias will perform live!