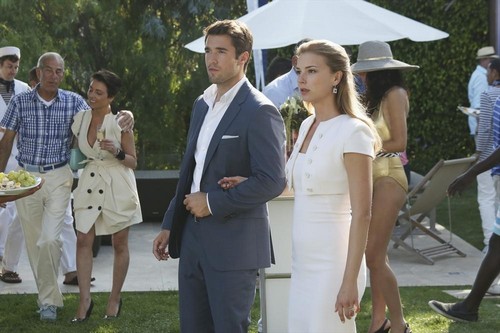 Tonight on ABC its hit drama REVENGE continues with a new episode called, “Confession.” On tonight’s show with a new lease on life, a showdown at Nolan’s house sends shock-waves through the Hamptons?  Did you watch the last week’s season 3 episode 2?  If you want to catch up we did and we recapped it here for you!

On last week’s show Emily’s next target took her into uncharted, sacred terrain, now that the former Grayson Global executive was a reformed clergyman. Victoria made a bold move with Patrick, and Margaux presented Daniel with an intriguing proposal.

On tonight’s show with a new lease on life, Nolan throws a housewarming party worthy of The Hampton’s elite, but an unexpected guest leads to a showdown that sends shockwaves through the community, while Conrad’s mortality causes him to question his sins.

Tonight’s Revenge season 3 episode 3 is going to be exciting, and you won’t want to miss. So be sure to tune in for our live coverage of Revenge — tonight at 9PM EST!  While you wait for our recap, hit the comments and let us know how excited you are about the new season of the Revenge? Check out a Sneak peek video of tonight’s episode below!

AS Emily begins to prep Conrad to seeking a “higher” means of comfort, unbeknownst to her, Aiden is telling some very revealing stories to Victoria. He’s trying to paint her as grafter in her future mother-in-law’s eyes in order to for Victoria to look more closely at Emily’s finances. She did come by the money lawfully but as Amanda and not Emily. The money was trust set up by Nolan and her father. Victoria’s people missed it the last time. This time however it’s a guarantee that Aiden will suddenly find evidence.

Emily apparently burned just too many people. Even the ones she doesn’t know about. Like Margaux who only recently did her best to steal Daniel away from her. Margaux has Daniel working for her and things need to be done her way or else. The or else being if Daniel doesn’t get her invited to the hottest party of the summer then maybe she needs to have a chat with Emily.

Nolan’s party is what everyone is talking about. Jack doesn’t want to go because he still feeling hurt and betrayed by the secrets everyone kept from him. Daniel knows that his history with Nolan will make sure he never gets an invite even if Emily already got her’s. Then there’s Aiden who knows that his presence at the party will shake up Emily and possibly leave her wide open to Victoria’s serial killer stare.

Despite their previous encounters with what happens at big to-dos everyone is going. Including newbie, Patrick. Nolan had accidentally invited him out of a weak moment in flirtation. If ever there was a winner for one of these shindigs then it will be Victoria. She planted enough seeds of doubt about Emily in Daniel to know she’s in for a show.

Nolan walks in just when Daniel’s interrogation was finishing up. Emily brushes it off but soon she’ll start to guess why. She gets her own though later when she personally drops off Victoria’s invitation to Nolan’s party. Patrick may be new but he picked up his mother’s cattiness very quickly. Emily lets neither of them feel they got the best of her. She simply drops the statement that Nolan is looking forward to seeing Patrick. Victoria knows better than to let the only child that showers affection around both Emily and Nolan. She warns him to stay away.

Emily’s building up Conrad’s faith has all lead to the return of Father Paul. She basically blackmailed him into offering Conrad “guidance”. Surprisingly she went as far to tell him her name. Well, Emily but still he’s cooperating with her… for now. Hopefully he won’t be another person out to get her at the end of this.

Victoria went to the party on Aiden’s arm expecting fireworks. The kind she got was not what she was expecting. For one she didn’t think if she kept needling Emily over buying Nolan his house then she would have Emily reveal to all that the Graysons were bankrupt. Emily had earlier made a smart comment over Margaux being Jack’s date. So this moment plus the rest at the party will only make her appear even more elitist. Especially to Charlotte who has yet to start speaking to her as a friend again.

Once the two dueling queens left a guest decided to show up late to the party. Patrick doesn’t want to end his burgeoning friendship with Nolan for some unknown reason.

Aiden’s people couldn’t find out where Emily’s money came from. That is the line he fed Victoria over lunch. Which is odd because he knows where the money comes from. Was this all a way to play Victoria? She won’t let him back out after his “failure”. She still wants to plot but what will Aiden do next?

He’s not the only one plotting. Daniel killed Margaux’s story. She wanted to do a feature piece on Nolan revealing the whole truth. That can’t happen. Daniel would never want anyone to know what he and his family involved themselves with. So he made sure to bury it leaving Margaux more curious. Before she was fishing, now she knows Nolan has a good story.

To help with upset she goes to Jack. Where Emily assures her she’s in good hands.

Conrad is coming clean. He’s heading out to turn himself in and decides to tell Victoria as he’s leaving. She doesn’t take it well. Which was expected but as she’s fallen so low, they should take her death threats to heart.

Aiden did come back for Emily. To help her take down the Graysons. They’re not back together together but she has feelings for him.

Conrad and Father Paul were in his car when it crashed. Conrad is fine but the same can’t be said for the good priest.