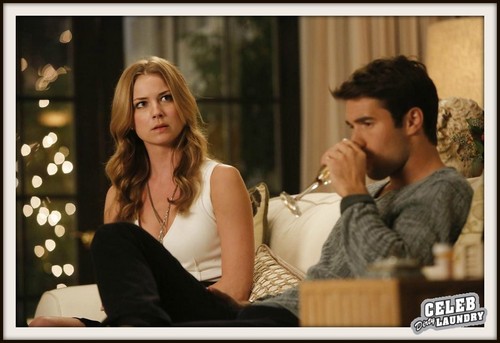 Tonight on ABC its hit drama REVENGE continues with a new episode called, “Sin.” On tonight’s show can a higher power have any influence on a Grayson, or maybe even Emily?  Did you watch the last week’s season 3 premiere?  If you want to catch up we did and we recapped it here for you!

On last week’s show the summer season kicked off in The Hamptons as Emily Thorne’s course of revenge was renewed and set against an unexpected timeline. Meanwhile the return of Victoria Grayson’s son brought changes and complications to the all-powerful family. And a glimpse into the future showed that the wedding of the century might lead to Emily’s ultimate demise.

On tonight’s show Emily’s next target takes her into unchartered, sacred terrain, now that the former Grayson Global executive is a reformed clergyman. Victoria makes a bold move with Patrick, and Margaux presents Daniel with an intriguing proposal.

Tonight’s Revenge season 3 episode 2 is going to be exciting, and you won’t want to miss. So be sure to tune in for our live coverage of Revenge — tonight at 9PM EST!  While you wait for our recap, hit the comments and let us know how excited you are about the new season of the Revenge? Check out a Sneak peek video of tonight’s episode below!

Victoria Grayson may be willing to take down Emily but that doesn’t mean she’s going to follow Aiden blindly. He can scheme all he wants and never win her trust. The longer Aiden skirts around telling her the truth about Emily and David Clark, the more she’ll think he can’t help her in any way. Things happen to people that are of no use to Victoria.

Emily in the meantime is rushing through her wedding plans. She’s even found just the priest to perform her ceremony. The man that used to work for the Graysons and helped turned people away from David during his trial. Jack thought if he gave her a deadline then all of this would have stopped. Yet all he served to do was make her revenge expedited. She has Nolan hiding her favorite box and she’s got Daniel falling on every word. The only question now is how she’ll get revenge on a man of the cloth?

Charlotte pays a visit to Jack’s place. She does still believe she’s Aunt Charlotte. It seems that she wanted to remember with Jack. Remember Amanda and Declan. She’s been taking over at the house making sure her father was relaxing. She looks for comfort with Jack on why bad things happen to the best people. She never knows how lucky she was that Jack didn’t comment on that statement.

Father Paul is a man that knows a lot. The moment he was alone with Emily he gave her a small warning to be careful around the Graysons. Later he stops by the Manor to catch up with his old friends. He attempts to be pleasant but the couple each express their disgust with him in different forms. They saw his retirement as a betrayal. It probably be safer if he stopped being in their presence. If at any moment they see him as a threat then he could get hurt.

Emily was out to dinner with Daniel and his old friend Margeaux. Watching the French lady do her best to flirt with her fake fiancé can be just annoying as if he was a real one. As she excuses herself she finds Charlotte at the same bar. Yet Charlotte doesn’t want anything to do with her. She knows her mom’s “affair” rumor came from Emily.

It appears that Charlotte is at last wising up to Emily’s schemes and misuse of her trust. That will be two people Emily has lost since the beginning of the season. She’s also close to hurting her relationship with Nolan. Father Paul hasn’t been nothing but a good man since leaving Grayson Global. Nolan warns her that people can change and are expected to be forgiven for past sins.

Emily doesn’t expect to be forgiven so why should anyone else. She says this and then goes to Jack asking for help with Charlotte. She knows her sister is hurting and she wants Jack to help comfort her. To him, this is another way for her to pass the buck on what her actions have caused others.

Does she care? No. That’s why she went through on her plan to kidnap Father Paul. She’s gone too far to stop now. It explains why she’s no longer hiding her antagonism towards Victoria. She’s pushing everyone to their limit.

After Emily implied Victoria was keeping her son secret in order not to further embraces the family, Victoria staged a family dinner with him as a guest of honor. The dinner makes everyone one on edge. Conrad and Daniel end up going for the jugular. For all their ways on throwing Victoria away that doesn’t mean they were going to share her willingly. However they weren’t the ones that hurt Patrick at dinner. It was finding out that Victoria sent Frank, remember their former henchman, to get rid of him that hurt. She immediately begins apologizing and trying to explain when Conrad has an episode. It was more an episode of Emily poisoning him again but Charlotte is blaming the stress caused by Victoria and Patrick made his illness act up.

In truth the whole meeting was more than just Patrick. She called the dinner so that Emily would be out of the house while Aiden searches it.

Jack did try to help Charlotte but then he made things worse. He found out the reason she was so much pain was because she blamed herself for Declan’s death. He felt the only way for her to feel better was to tell her the truth about what Conrad did that day. He was right. She doesn’t feel guilty anymore and yet she lost her dad, someone she always thought she could rely on.

Nolan tried in vain to stop Emily plan against the priest and he even used her father’s diary to convince her not to do anything wrong. All that did was make her angry. Emily still went through with her plans but will Nolan understand why this time?

Margeaux did make her move on Daniel. He didn’t take her up on it and he’s ready to take a job working for her.

Emily regretted what she did to Father Paul. She finally opened her eyes to all the things he was doing for the community and it was too late. Her revenge got him transferred and forever under superstition. She was sad when Conrad surprised her by entering the church. He wanted to clear his conscience with the Father. Now he won’t get the chance to. That is before Emily realized she has to fix Father Paul’s situation. He can be the only man in the world that would get Conrad to confess everything. She only needs Nolan’s help to correct her mistake.