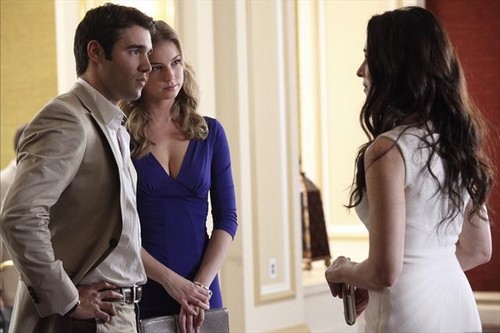 Tonight on ABC REVENGE returns with a whole new episode called “Collusion.” On tonight’s show Daniel proves he is a force to be reckoned with. Did you watch last week’s show? We did and we recapped it here for you!

On last week’s show a fundraiser and wine auction provided the perfect backdrop for Emily and Aiden’s next plan of attack, while Victoria strategically plotted her next move. Meanwhile, Jack, Declan and Amanda struggled with what lies ahead.

On tonight’s show With Emily by his side, Daniel goes toe to toe with his fiercest business rival, Jason Prosser, to land an important deal that Victoria is determined to block. Aiden takes a very dark turn, and Jack and Amanda’s future lands in the unlikely hands of Conrad Grayson.

Tonight’s Revenge episode 12 is going to be exciting, and you won’t want to miss. So be sure to tune in for our live coverage of Revenge — tonight at 9PM EST! While you wait for our recap, hit the comments and let us know how excited you are about the new season of the Revenge? Check out a Sneak peek video and photos of tonight’s episode below!

Tonight’s episode begins with the Grayson’s wishing Charlotte a happy birthday. She is quickly ushered out while Victoria and Grayson exchange barbs. Meanwhile Emily meets up with Aiden on the beach to discuss how she is playing Daniel and trying to get info about Aiden’s sister.

Jack and Amanda are in over their heads and it’s more than a little ironic that they’ve turned to Conrad Grayson for help. Padma is working behind the scenes with Karen in order to set Nolan up. Padma narrowly misses being caught on the phone with her but manages to distract Nolan with a kiss instead.

Amanda stops by to give Charlotte a birthday gift and while they are chatting Victoria calls to cancel her birthday plan for the evening with Charlotte. Amanda suggests that Charlotte consider the cancellation a gift.

Emily is helping Daniel to try and nail a business deal against rival, Jason Prosser. Victoria is also on the scene trying to help Jason to seal the deal. When everyone sits down to dinner things get ugly when Daniel decides it’s perfectly appropriate to air all of Jason’s dirty business laundry. Nolan gets his hands on a video of Aiden’s sister and sends it to Emily. The tagline is a life for a life and they realize that whomever holding her has targeted Victoria to take her place.

Emily catches Aiden before he kills Victoria and prevents him from becoming a full blown assassin for the other side. She swears they will find his sister but they’ll do it together and the right way.  The next day Victoria shows up at Emily’s and rakes her over the coals for supporting Daniel’s business endeavors.

Nolan convene’s with Emily and he confides in her that while he got rid of Marco last week it was a mistake. Padma has proven to know things that he never volunteered and so she is actually the mole. Emily suggests that Nolan play Padma like she’s playing him.

Charlotte gathers her parents and family together to ask them to respect her first grown up decision. She has filed paperwork to officially have her name changed from Charlotte Grayson to Charlotte Clark. Emily and Daniel go outside to escape the fallout. Emily chooses to tell Daniel that Victoria had asked her to rekindle things with Daniel. He confesses that he already suspected as much.

Nolan set up a camera in his office and watches Padma betray him with software data. At the same time Aiden gets another video of his sister appearing to be overdosed. Tuine in next week to see what will happen!