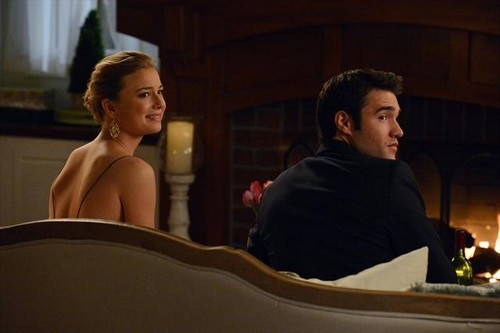 Tonight on ABC REVENGE returns with a whole new episode called “Sabotage.”  On tonight’s show Victoria strategically plots her next move.  Did you watch last week’s show?  We did and we recapped it here for you!

On last week’s show Victoria began plotting a scheme which, surprisingly, involved Emily, while Emily locked in on her next target, and Declan discovered something that might threaten the future of the Stowaway.

On tonight’s show a fundraiser and wine auction provide the perfect backdrop for Emily and Aiden’s next plan of attack, while Victoria strategically plots her next move. Meanwhile, Jack, Declan and Amanda struggle with what lies ahead.

Tonight’s Revenge episode 110 is going to be exciting, and you won’t want to miss. So be sure to tune in for our live coverage of Revenge — tonight at 9PM EST! While you wait for our recap, hit the comments and let us know how excited you are about the new season of the Revenge? Check out a Sneak peek video and photos of tonight’s episode below!

Tonight’s recap:  Tonight’s episode begins with Aiden trying to make sense out of catching Emily kissing another guy in spite of her connection to him. Amanda visits Jack in prison and they try to make sense out of what is going on. He believes that drugs were planted on the boat and Emily is out to avenge whatever happened to her father. Beyond that he and Amanda are lost.  Three minutes into the episode Victoria is already thinking of solving a major problem with sabatoge.

Padma creeps up on Nolan and gently asks for her job back. They share an emotional bond and so he caves and gives her the spot back. In another office Ashley is asking Conrad to come back and work her shady magic for him. He seems to think that in spite of their falling out she can be of some future use.

Nolan is trying to figure out who tipped Conrad off and he seems to lean towards Marco, who points out how conveniently Padma has just reappeared in his life. It’s pretty clear that Nolan isn’t sure who exactly to trust.

Aiden, Daniel and Emily are all at a function intended to benefit children but they are clearly biding their time while waiting for fireworks. During the auction it turns into a bidding war between Jason and Daniel. Daniel wins with a million dollar bid right about the time that Ellen Crowley shows up. She and Aiden have a private chat where he tells Ellen that he wants to see his sister. Emily and Nolan look on at a distance wondering what the two are chatting about.

Charlotte convinces Amanda to go and talk to Conrad to see if he can help the situation with Jack. Instead he demands that Amanda keep her distance from his family, especially Charlotte. He does say the Decland can stay at the house but when Charlotte tells him he absolutely refuses the offer.

Helen and Aiden get into an elevator together and begin to talk when the elevator thumps to a stop. Everything in it goes dead as gas starts to come in through the upper vents. In about five seconds both of them are unconscious on the floor.

In the next scene they are tied together with bags over their heads . The person holding them hostage also is incognito with a voice changer. Aiden gets control of the situation, over powers the captor and gets Helen out of there. In the end it was all an elaborate set up. Em was the captor and Nolan was back up when Aiden  escaped. It’s apparently a rouse to get Helen to trust Aiden.

Nolan believes that Marco is feeding info to Conrad and thinks he found ghost emails to prove it. Marco still is leaning on the notion that it’s not him, but Padma. Emily wraps up her evening toasting with Daniel. Aiden interrupts to get his bag and Daniel decides to leave as well. The episode wraps with Padma making a call to Helen. Tune in next week to see what happens.