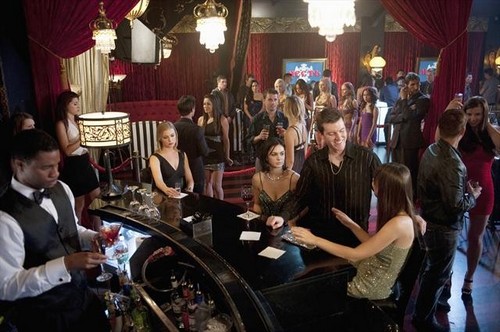 Tonight on ABC a whole-new episode of REVENGE airs called “Lineage.” On tonight’s show a look into the murky past sheds light on present-day residents of the Hamptons. Did you watch last week’s episode? We did and we recapped it here for you!

On last week’s show things got complicated as Mason Treadwell delved further into Emily’s past while Kara began to unravel, putting the Graysons in her crosshairs.

On tonight’s show Hindsight’s 20/20 when a flashback to 2006 has Victoria getting a surprise visit from her estranged mother, triggering memories of her tumultuous upbringing. Emily embarks on her first mission under Takeda’s training, where she meets Aiden and learns of his revenge path. 2006 is also the year Nolcorp goes public, and Carl Porter gets into hot water when he crosses the wrong people on the docks.

Tonight’s Revenge episode 8 is going to be exciting, and you won’t want to miss. So be sure to tune in for our live coverage of Revenge — tonight at 9PM EST! While you wait for our recap, hit the comments and let us know how excited you are about the new season of the Revenge? Check out a Sneak peek video and photos of tonight’s episode below!

Emily is in a nightclub and orders Vodka. She quickly drinks it and asks for a man named Sergi. The server say Sergi is in the VIP section with the other girls.

Meanwhile, Daniel’s parents are pressuring him to accept opportunities that come along. Victoria’s mother arrives to see Daniel, the grandson she barely knew and was certain was to embrace her desire to mend fences. Grandma says that love doesn’t avail itself conveniently and that Conrad was married when she met Victoria. There is a flashback scene between Victoria and her mother, detailing that she hopes Conrad will ask her to marry her. grandma is going to stay for Thanksgiving.

Sergi says that one of the girls is trembling and then shoos them away to entice men. Emily speaks to one of the girls in the shadows, She tells them the man she is gonna meet up with, Dimitri, traffics women. The woman says she’s just trying to pay her rent. Emily offers to help in exchange for the woman’s help who will get some info from Dimitri and then quickly leave after saying she needs to get a dress.

The waiter says Emily didn’t pay for her drinks. She says to put it on Sergi’s tab. He says she doesn’t know Sergi. She says to keep observations to himself and he just may get a tip.

Emily speaks to a man who insists her father would be proud. She says she’s ready.

There’s a board meeting. Nolan is trying to get the staff to figure out an equation and asks Mr. Ramaro to take a stab. It’s announced that the company is going public and they have Mr. Ramaro to thank. They are then dismissed, but ordered to grab a bottle of champagne on the way out.

Daniel says that grandma told him that she and Victoria haven’t spoken in years but now Victoria is picking out China. Daniel is still resistant to join the company. He is taking a creative workshop in creative writing—poetry. He wants his dad to take a look at what he’s written. Conrad says he’d be honored and wants to support his dreams.

The showdown man wants to know how the plans against the Grayson’s are going. Emily says she was working on a plan to use Conrad’s previous affair to his advantage but this diversion came along: she must find a woman that went missing at the hands of Dimitiri and then she can return to her true calling.

Grandma is dating a man named Ben. Victoria is suspicious. Grandma tells Victoria not to disappoint her. There is another flashback with a 15 year old Victoria. Ben offers compliments to Victoria.

The waiter says that Emily has transformed, evidenced by her new get up. She is now dressed in white. Emily approaches Sergi and says her roommate can’t meet with Dimitri. Sergi says Emily will fill in and for $3,000, she’ll be whoever he wants her to be. Sergi frisks Emily and the waiter swipes a gun. Emily relays what she observes as the waiter tells her to leave as it is not safe. The Emily says she can take care of herself. The waiter pulls a gun on Sergi, wanting to avenge his sister.

Sergi notes that Emily took a bold act for someone so young as she tried to save the waiter. She informs her partner that she is in the safe room. He is on his way and informs her that her safety has to be her primary concern, not the waiter. But she feels obligated to help since he tried to help her.

Nolan gets a gift from his boyfriend.

Victoria starts questioning Ben, asking if he’s ever been married. Ben says he’s a widower. Grandma says it’s the first think that bonded them. Victoria thinks their meeting sounds pre-planned. Grandma says she has genuinely fallen for Ben, unlike her last husband Maxwell who was a means to an end. Grandma says she wouldn’t change a thing; to look at Victoria, she is the matriarch of a privileged family and some might feel she deserves the credit.

Conrad asks if Victoria is alright and that he can send people away.

Jack wonders what his dad is doing with a gun. Dad says he is going to fight for his boy.  There is some type of commotion.

The waiter is being beaten up by the Russians, demanding to know who sent him. Emily is spying from afar. She busts out of her hiding place and tries to free him. She says she is his ally. Emily wants to know what information he has. Emily frees him. The Russians return and capture both. They joke that Emily gets to use self defense classes after all and make her Daddy proud.

Jack wants to call the cops but Dad doesn’t. A man enters and says it seems like someone was trying to send a message. The guy applying the pressure to his Dad says he’ll be back in an hour to do business. Jack’s father doesn’t want his son speaking for him again.

It’s discovered that money is missing from an account Marco set up for Nolan.

Conrad wants to know what’s going on with Daniel’s creative writing class. Victoria says the family will always be proud of him and resumes interrogating ben, asking if he ever had children. Victoria attempts to embarrass her mother by trying to tell a story about the last thanksgiving she had with her mother. It is a flashback once more. A 15 year old Victoria hears her mother arguing with her father, Thomas. He walks out on her. Marion demands that Victoria come to her quickly and accuses her of batting her eyes like a whore at Thomas. Marian wants Victoria to shoot her in some grand scheme to make him look bad, as if she were protecting him from Thomas.

In the present, Victoria says Marian was right. She was not found guilty but treated in a facility. By the time she returned, Marian had met Maxwell. Marian saw Maxwell leaving Victoria’s room and that Marian kicked her out. Victoria cries that she was only 15! Marian says that she should have gotten rid of Victoria since she drives a wedge between her and everyman. Ben leaves, wanting to get far away from Marian.

At the club, Emily starts fighting the Russians. The waiter shoots Sergi, demanding to know where his sister is. Emily tells Aiden the waiter not to kill him. Emily says no good will come of it. Sergi says that she is probably dead. Sergi taunts Aiden, claiming Colleen (his sister) grew to like being a sex slave. Aiden kills him. Emily’s partner finds the dead Russian and will take care of the dead body.

Nolan tells Marco to wait. Nolan says the missing money went to David Clarke’s daughter. He only set up the account so she could get what was rightfully hers after David’s conviction. Marco tells Nolan to stop believing in conspiracy theories. Nolan says he was not about to screw over David’s daughter and if he doesn’t get that, they’re not going to be together. Marco says Nolan is choosing a terrorist over him. Nolan says he wants o choose the man who took him at his word. Nolan fires him.

Victoria finds Conrad burning Daniel’s poetry.  Conrad says it’s good but this is for his own good. He will have colleges send him rejection letters. Victoria says that he is breaking his son’s heart. Conrad says that Victoria just did that with her mother. It turns out that Victoria set up Marian with Ben who was secretly paid off.

Porter pays off the henchman. Matt suddenly shoots the henchman for what he did to his daughter. Matt says the gun belonged to Porter and that they’re in this together.  Porter tries to lie to Jack about what just happened.

Aiden asks Emily what her father was like. She says he was kind, generous, humble and strong; that he died for her. Aiden says it’s like his sister and he didn’t deserve what happened to her. He doesn’t want another family to suffer the way they have.

In the present day, Aiden is in bed with Emily. He says she fought for him when no one else would and forced Tekeda to take him on. Emily doesn’t want Aiden to disappear on him again. He calls her by “Amanda” and says he won’t.

Daniel calls Marco. He says he has a business proposition for him.

Victoria tells Conrad that they have to protect Daniel from becoming a target. They say perhaps Daniel should have become a poet after all.

Aiden wonders where Emily snuck off to after she got out of bed. She is looking at a box that contains all she ever wanted to know about her father and the person she used to be. Emily says it’s a journey with no end.