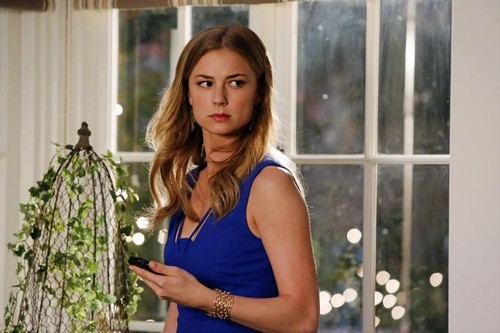 Tonight on ABC REVENGE finally returns after a 4 week hiatus with a whole new episode called “Identity.” On tonight’s show Emily, Aiden and Nolan must track down the Falcon.  Juju Change guest starts are herself. Did you watch the last episode before the break?  We did and if you want to catch up, we recapped it here for you!

On last show Hamptonites celebrated Halloween with a glamorous masquerade ball hosted by the Graysons, which was a perfect setting for Emily to drag out Victoria’s skeletons. Jack stepped up his revenge plans and found an unexpected ally, and Aiden made a bold move with a gruesome conclusion.

On tonight’s show desperate to find Padma, Emily, Aiden and Nolan must track down the Falc0n’s true identity and put a stop to the Initiative while Emily struggles with her future and Victoria fights her own battle after a very exposing interview on “Nightline.”

Tonight’s Revenge episode 19 is going to be exciting, and you won’t want to miss. So be sure to tune in for our live coverage of Revenge — tonight at 9PM EST! While you wait for our recap, hit the comments and let us know how excited you are about the new season of the Revenge? Check out a Sneak peek video of tonight’s episode below!

After a 4 week hiatus Revenge is picking up exactly where it left off, with Emily rolling out of bed after a good romp with Daniel. She rushes to Nolan’s side after he is released from jail after being accused of murdering Padma his former employee/lover. Emily informs him that the Falcon is responsible and she has hatched a plan to take him down. Aiden, Em and Nolan all believe that he is the source of all their problems and they know that Victoria knows who it is.

Ashley has been fired by Conrad and is now helping Jack. The fact that she still has access to Conrad’s schedule. Em wants to check in on the baby but the sight of Ashley sends her back out the door pretty fast. She heads back to Nolan and he is patched into Victoria’s medical records. The Falcon has helped to forge stuff and the moment he access her records Nolan is pinged. The Falcon sends Nolan an instant message making it clear that he knows who has caught on.

For some reason that makes absolutely no sense to me Nolan agrees to meet The Falcon at a Brooklyn arcade. He is stunned to realize that the falcon is actually an asian girl and he kicks her butt at whatever they play. He demands that she erase everything bad about him that’s online.

Ashley tells Jack that she can find out what Conrad is lying about if she gets five minutes alone with him. She says the tell is in his eyes.  Meanwhile Conrad is ready to tell the world that Victoria has a kid out there in the world somewhere and has a news crew in the living room ready to do a Nightline interview. During the interview Daniel and Em’s engagement become public knowledge. As soon as it’s over she calls Jack and tells him that it’s not how it look. He tells her that he doesn’t want his son around Grayson’s and now that includes her.

During Victoria and Conrad’s portion of the interview, he confirms their version of the truth, that Victoria had an abortion, instead of giving away her six month old child. She confirms the lie and leaves the interview. Meanwhile once Falcon plugged Nolan’s stuff into her drive she gave him full access to her computer. He gathered proof of her hacking and called the FBI. Em looks at her photo and remembers having seen her around over the years.

Conrad throws Patrick, Victoria’s grown son, in her face and tells her eventually people will figure it out. He tells her he’ll leave her alone with her demons. Ashley creeps up on Conrad  And gives him proof that he needs to be more careful. He welcomes her into the fold again, as Victoria asks Nolan for help. Tune in next week for more Revenge.