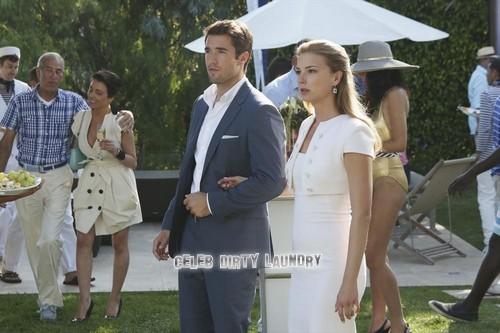 Tonight on ABC its hit drama REVENGE returns with its season three premiere called “Fear.” On tonight’s show a glimpse at the wedding of the century may lead to the ultimate demise of Emily Throne.  Did you watch the last season’s finale episode?  If you want to catch up we did and we recapped it here for you!

On last season’s finale it was filled with high octane and life changing moments.  A series of dangerous events were set in motion and it all came to a head in one catastrophic moment that changed everyone’s lives forever.  The devastation led to a heartbreaking death that  sent shock-waves down the shoreline and forced Emily to take a hard look at the truth and the path of revenge she had embarked on.

On tonight’s season premiere the summer season kicks off in The Hamptons as Emily Thorne’s course of revenge is renewed and set against an unexpected timeline. Meanwhile the return of Victoria Grayson’s son brings changes and complications to the all-powerful family. And a glimpse into the future shows that the wedding of the century may lead to Emily’s ultimate demise.

Tonight’s Revenge season 3 premiere is going to be exciting, and you won’t want to miss. So be sure to tune in for our live coverage of Revenge — tonight at 9PM EST!  While you wait for our recap, hit the comments and let us know how excited you are about the new season of the Revenge? Check out a Sneak peek video of tonight’s episode below!

It’s finally time for the season premiere of Revenge and not a moment too soon. Last season ended with Emily being shot in the stomach in her wedding dress. It came moments after she revealed to Jack that she is actually Amanda. Emily crashed to the water below as this new season opens but we quickly learn that it was actually a flash forward and we are tossed back in time by two months. This season is starting off on Memorial Day weekend when Em is plotting for a summer of drama.

Daniel is pressing Emily to set a wedding date and Victoria has been MIA for months as she romps with her favorite stable boy- at least until Charlotte arrives to bust up their party. She tells Emily that she has come home from traveling abroad because Victoria left her no other financial option. After talking to Charlotte Em pays Victoria a visit. She tells her that Ashley informed her of Victoria’s affair and while Em tells her she knows that it’s not true she sure seems hapy. Victoria admits that it’s Patrick not the stable boy who has lifted her spirits and she agrees to attend Em’s party before the two part ways. Ironically Conrad’s self portrait is supposed to be revealed at the party.

Daniel is having a drink when a woman named Margo sneaks up on him. The two exchange in flirty banter before he informs her that Emily is his girlfriend.

Charlotte discovers Patrick naked in an upstairs bedroom and after she accuses him of being her mothers new lover he informs her that he’s he brother. Charlotte’s ready for a turf war and tells him that being in the family comes at a price and he’ll pay too. Nolan, fresh out of prison tells Emily that Jack has also returned so she heads to see him. She walks into his old bar and he tells her that he understands why she did what she did, he now understands the love a child has for their father. He pulls Em in for a kiss and then backs off saying that he wasn’t sure how he felt until that moment and now he knows that there is nothing there. He tells Em it’s just him and his son now and that she can get lost so she runs out in tears.

At Emily’s coming out party she presents Conrad with his self portrait and as he gets up to make a speech he stammers and collapses. According to a doctor at the hospital he has Huntington’s disease. Daniel is still at the party when Margo walks up to him and tells him that someone already linked info about his father’s diagnosis. Daniel goes to talk to Conrad about stepping down.

Jack and Amanda have a chat about this latest situation with Conrad and he gives her until the end of the summer to take care of business and leave town or he will tell them that they killed the wrong girl. Victoria and Em confront ashley about selling stories, including Conrad’s illness to the press and demand she hop a plane and leave town.

As Daniel researches his father’s illness Emily suggests they marry on Aug 8th because she always believed something good would happen that day. Tonight’s episode ends with Nolan and Emily plotting together on the beach in the dark over a bottle of wine as Victoria finds a familiar face on her balcony!