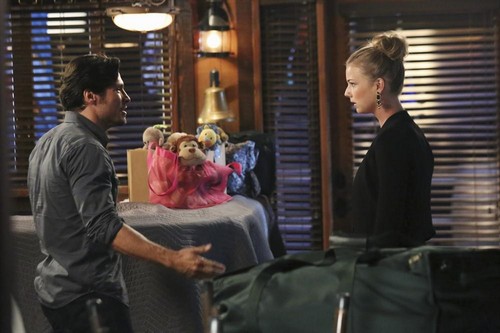 Tonight on ABC its hit drama REVENGE continues with a new episode called, “Control.” On tonight’s show Jack finds himself n the crosshairs again.  Did you watch the last week’s season 3 episode 5?  If you want to catch up we did and we recapped it here for you!

On last week’s show when Emily’s biggest takedown crashed and burned, she had to rely on help from an unlikely source to investigate what went wrong. Meanwhile, to protect her own future, Victoria made a bold move to secure her independence.

On tonight’s show Emily may be losing hold of her plan, and her groom, when Daniel makes a startling statement at the Voulez magazine launch party, leaving her vulnerable and ready to do whatever it takes. And Jack is forced to make a difficult decision for the sake of his family after he finds himself in a new enemy’s crosshairs.

Tonight’s Revenge season 3 episode 5 is going to be exciting, and you won’t want to miss. So be sure to tune in for our live coverage of Revenge — tonight at 9PM EST!  While you wait for our recap, hit the comments and let us know how excited you are about the new season of the Revenge? Check out a Sneak peek video of tonight’s episode below!

It’s about that time- you know time for our weekly fix of Emily trying to bring down the Grayson’s one by one. While Emily and Daniel’s wedding is still a go it seems like the potential side show is far more intriguing. Conrad still has Aiden doing some work for him but he’s basically acting as a double agent. Conrad wants Jack taken down but rather than do that Aiden gives him a stern warning to get away fast. Aiden feels that he needs to give Jack the heads up and tells him to consider it a warning.

While Emily has a clue of what really happened to Father Paul but Victoria tells her that Conrad believes that it was Jack that messed with the brakes. Em rushes to the boat to warn Jack and he tells her that he was already given a heads up by Aiden who broke in and was waiting for him earlier in the day. Jack tells Em to make her move to topple Conrad or else he needs to leave town because the next guy that he finds waiting for him might actually kill him.

Of course after Victoria all but sends Emily running to warn Jack she then throws her under the bus at Daniel’s magazine party. There she points out that his fiance is nowhere to be found. It seems that Em is taking heat from all angles. After Nolan’s kiss with Patrick he seems to have been sent into a tailspin. Nolan tells her that this whole situation is beginning to wear on him and her games need to end soon. Nolan goes to Patrick and apologizes for screwing everything up with him.

Emily has a blowout in whispers with Aiden over his threatening Jack and he explains that Conrad was catching on to the real situation so he had to make it look good and take the job of going after Jack. Em leaves Aiden in a huff and returns to Daniel’s magazine party. Once inside he is obviously beyond furious with her. He tells Em that he is trying to make a name for himself to help give them a future and that she clearly doesn’t care. Daniel breaks off the engagement on the spot and storms off leaving Em alone.

Em goes to Nolan for comfort and he tells her that the man realizes she’s faking it and that the engagement and her plan will be off unless she shares a piece of herself. Emily heads to Jack’s and is rifling thru stuff upstairs when Sheila pays Jack a visit. She originally came to blow him off but he explains about the break in and says that she is the first woman to make him smile in awhile. They share a kiss while Em looks on.

Back at Victoria’s mansion Aiden tells her that he figured out that there was no break in to tamper with the breaks. That means a family member did it and used the access code to get in. Aiden tells Victoria he is bringing the info to her rather than Conrad so that she can deal with it internally. Aiden claims that Charlotte is responsible. Victoria starts to tell Conrad the truth when Charlotte walks in. She tearfully explains that she was guilty because she blamed Conrad for killing her relationship with Deckland and for a brief moment she wanted him dead.

As she is confessing Aiden tells Emily that Patrick cut the breaks but Charlotte is talking the fall. Em interrupts Aiden to apologize to him for making him feel used. She tells him that he means everything to her before kissing him. Em then returns home to find Daniel packing. She shares a supposed photo of her (or Amanda) with her parents and has that deep moment with Daniel that Nolan had suggested. Worked like a charm and the wedding is back on. Patrick decided to chase after Nolan and tonight’s show ends with them ripping each others’ clothes off. Tune in next week for more Revenge!