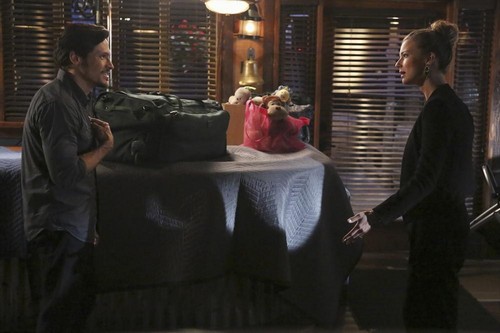 Tonight on ABC its hit drama REVENGE continues with a new episode called, “Mercy.” On tonight’s show in fiery aftermath of Emily’s plan she discovers a secret that could change everything.  Did you watch the last week’s season 3 episode 3?  If you want to catch up we did and we recapped it here for you!

On last week’s show with a new lease on life, Nolan threw a housewarming party worthy of The Hampton’s elite, but an unexpected guest led to a showdown that sent shockwaves through the community, while Conrad’s mortality caused him to question his sins.

On tonight’s show when Emily’s biggest takedown yet crashes and burns, she must rely on help from an unlikely source to investigate what went wrong. Meanwhile, to protect her own future, Victoria makes a bold move to secure her independence.

Tonight’s Revenge season 3 episode 4 is going to be exciting, and you won’t want to miss. So be sure to tune in for our live coverage of Revenge — tonight at 9PM EST!  While you wait for our recap, hit the comments and let us know how excited you are about the new season of the Revenge? Check out a Sneak peek video of tonight’s episode below!

The car accident that changed everything. Emily was finally going to get what she always wanted when the accident happened. Victoria at the time was contemplating leaving Conrad once again with a lot of prodding from Patrick when she got the word. Charlotte ignored her mother’s call believing it was another family trap. So she doesn’t know about the car accident or the cover-up that immediately occurred afterwards.

Father Paul didn’t make it. He died from a cardiac arrest and the only person grieving him is Emily. She had come to respect him for wanting to do the right thing. She might have even been honest with him down the road. Now that will never happen. No instead she has to go along with Conrad’s plan. He’s going to claim the priest was driving in order to escape a manslaughter charge. Earlier, Conrad was told not to drive. His medication would have ruined his reflexes.

But Emily had lowered his dosage making him perfectly fit to drive. Nolan believes the incident could all be a set-up yet he has other ideas on his mind at the moment. He wants to get to know Patrick a little better. Why shouldn’t he? Patrick is young, handsome, and unfortunately ready to leave the Hamptons like any other sane human being would do. Before he leaves Nolan is going his best to find out all he needs.

Emily is looking for a way for the truth about the accident to come out. She was hoping to drop hints during the police investigation only to learn that Daniel bribed the cops into giving her disposition himself. Maybe he didn’t trust her enough but he should have known Emily doesn’t like people taking control from her. Hope he likes the tidbit she gave his magazine about him.

Later Aiden appears to be worried about her. He knows how much Father Paul’s death cost her. The chances of redeeming her father are slim now without him. He’s not the only person to offer his help. Jack did the same and both times Emily turned down her white knights.

Daniel did enjoy the byline by the way. Emily bring up his drunk driving can make him relatable to the readers while at the same time remind him never to talk for her. He was pissed but he sure has a clearer understanding of where she stands.

Emily was in the junk yard all set to find proof of who was driving that night when low and behold she runs into Jack of all people. He says he wants to help and if she doesn’t allow him to then he’ll start talking. It looks like all aboard when Jack helps her with the car. He notices that the driver would have had an air bag on impact. Conrad did walk away with bruises on his face.

Proof found and victory should be near but there is a problem. Jack hasn’t gone to the police at the first opportunity. Emily is still waiting for news as she goes to Victoria’s big night out. The former society queen has gotten herself a job at an art gallery. She had went to a friend for a job and the “friend” decided to enjoy Victoria’s downfall. That is never a smart idea.

Patrick had gone to this art dealer to fence a stolen painting of Victoria’s. The lady sold it because Patrick knew she would do a dirty job easily. Victoria had supposedly learned about everything and created lemonade out of lemons. She blackmails her former friend into giving her the gallery. From broke to high-end gallery owner in a matter of days means Victoria hasn’t given up fighting for social status. This time she has Patrick as a helpful side-kick.

Emily learned why Jack went M.I.A. He found out someone cut Conrad’s brakes. It doesn’t matter who was driving. None of it will be put down as Conrad’s fault. Speaking of Conrad, he calls in a family meeting. The doctors that examined him after the accident found out he’d been misdiagnosed. Conrad knows he’s healthy and he’s back to plotting.

He lost his governorship and now he wants to think bigger.

Nolan did investigate Patrick. He had to go all the way to Florida to find out something good. Patrick is truly his type. Victoria’s favorite son is gay.

Aiden went too far this time. He never liked hearing Emily told Jack everything. He felt left out so when the opportunity presented itself, he took it. He told Conrad and Victoria about the breaks getting cut. He tells them Jack did it. Is he being truthful or jealous?