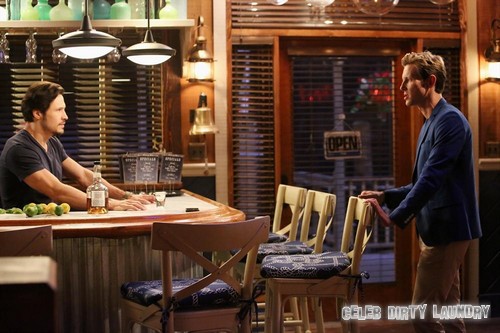 REVENGE returned tonight to ABC with another fabulous episode.  As usual, we will be providing you with the juiciest, previews and teasers out there.  We have a sneak peek video and some insight for you below on what is going on next week below.

On tonight’s show Emily may be losing hold of her plan, and her groom, when Daniel makes a startling statement at the Voulez magazine launch party, leaving her vulnerable and ready to do whatever it takes. And Jack is forced to make a difficult decision for the sake of his family after he finds himself in a new enemy’s cross-hairs.  If you missed the episode we have a full and detailed recap, right here for you.

Spoiler alert: If you’re one of those people who doesn’t like spoilers, stop reading now! We have some juicy spoilers for you about the season 3 episode 6 of ABC’s “Dissolution.”

ABC’s Official Synopsis: “Roadblocks seem to be mounting for Emily as Daniel’s attention is focused elsewhere, Grayson Manor may cease to exist, and two of the most important people in Emily’s life start turning on her – leading her to do something very uncharacteristic.”  The episode was written by Gretchen J. Berg & Aaron Harberts, and directed by Bobby Roth.

On next week’s show amidst a sea of complications, Emily shows a new sense of resolve when two of the most important people in her life turn on her.

Revenge Season 3, Episode 6 “Dissolution” airs on ABC on November 3rd, 2013. Check out the preview videos and photos from episode 6 below and let us know in the comments below what you think!