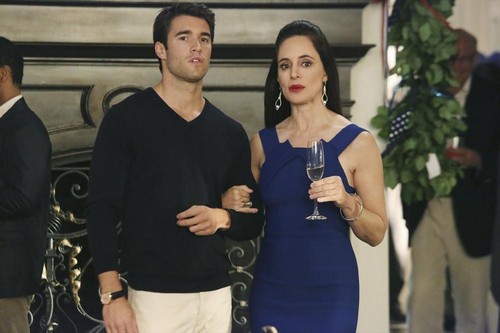 REVENGE returned tonight to ABC and each week seems to be getting a little better, I cannot wait till next week.  As usual, we will be providing you with the juiciest, previews and teasers out there.  We have a sneak peek video and some insight for you below on what is going on next week below.

On tonight’s show Roadblocks seemed to be mounting for Emily as Daniel’s attention was focused elsewhere, Grayson Manor may cease to exist, and two of the most important people in Emily’s life started turning on her – leading her to do something very uncharacteristic.  The episode was written by Gretchen J. Berg & Aaron Harberts, and directed by Bobby Roth.  If you missed the episode we have a full and detailed recap, right here for you.

Spoiler alert: If you’re one of those people who doesn’t like spoilers, stop reading now! We have some juicy spoilers for you about the season 3 episode 7 of ABC’s “Resurgence.”

ABC’s Official Synopsis:  “Conrad hires famed party-girl turned PR mastermind Bizzy Preston (Ana Ortiz) to restore the Grayson family name, while Emily sinks her teeth deeper into her plan and Nolan has a revenge-agenda of his own.”

On next week’s show Emily sinks her teeth deeper into her plan Nolan has his own revenge-agenda..  There is another event and does it mean we will see the Grayson family getting together?  Check out the photos below.  Guest starring next week are Karine Vanasse as Margaux LeMarchal and Ana Ortiz as Bizzy Preston.

Revenge Season 3, Episode 7 “Resurgence” airs on ABC on November 10th, 2013. Check out the preview videos and photos from episode 6 below and let us know in the comments below what you think!