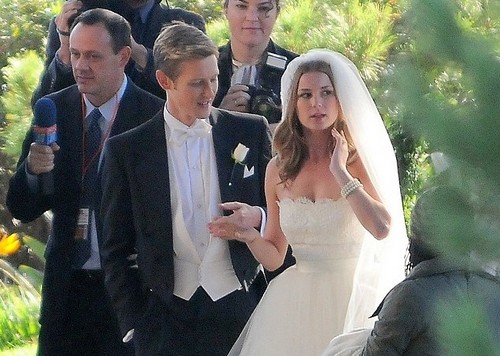 REVENGE returned tonight to ABC and what an episode, Emily is pregnant at least that is what she says.  I cannot wait till next episode, and we have a sneak peek video and some insight for you below on what is going on next week below.

On tonight’s show Victoria eagerly threw Emily a bridal shower that neither of them will soon forget. And when Daniel grew more distant, Emily had to take drastic measures.  Emily told Daniel she was pregnant.  If you missed the episode we have a full and detailed recap, right here for you.

Spoiler alert: If you’re one of those people who doesn’t like spoilers, stop reading now! We have some juicy spoilers for you about the season 3 episode 9 of ABC’s “Surrender.”

ABC’s Official Synopsis: “As the wedding approaches, Emily tries to put the final touches on her plan, but the Graysons seem to slip from her grasp.”

On the next episode, which will air in three weeks –  Emily is trying to keep the Graysons under control and continues to worry about keeping Daniel under her control.  Victoria and Charlotte are still trying to break them up.  No matter how many roadblocks are thrown in her way Emily is determined that her plan works.

From the promo video there is a lot going down on the next episode – someone is getting arrested, a lot of wedding coverage, blood on the ground and Emily floating in the water shot.

Revenge Season 3, Episode 9 “Surrender” airs on ABC on December 8, 2013. Check out the preview videos and photos from episode 6 below and let us know in the comments below what you think!