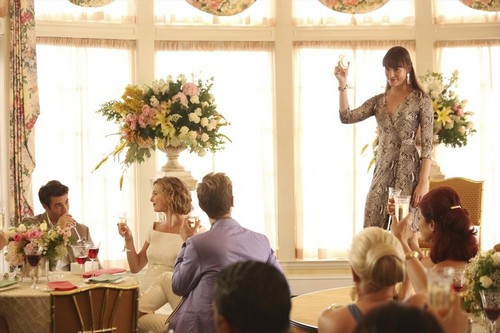 Tonight on ABC its hit drama REVENGE continues with a new episode called, “Secrecy.” On tonight’s show Victoria throws Emily A Bridal Shower that is anything but conventional.  Did you watch the last week’s season 3 episode 6?  If you want to catch up we did and we recapped it here for you!

On last week’s show Conrad hired famed party-girl turned PR mastermind Bizzy Preston (Ana Ortiz) to restore the Grayson family name, while Emily sunk her teeth deeper into her plan and Nolan had a revenge-agenda of his own.

On tonight’s show Victoria eagerly throws Emily a bridal shower that neither of them will soon forget. And when Daniel grows more distant, Emily has to take drastic measures.  “Secrecy” was written by Sallie Patrick & JaSheika James, and directed by Colin Bucksey.

Tonight’s Revenge season 3 episode 8 is going to be exciting, and you won’t want to miss. So be sure to tune in for our live coverage of Revenge — tonight at 9 PM EST!  While you wait for our recap, hit the comments and let us know how excited you are about the new season of the Revenge? Check out a sneak peek video of tonight’s episode [CLICK HERE]

Emily’s life is getting more complicated. She tries to capture Daniel attention to no avail. He’s much too busy thinking over the past. More specifically, his ex-Sarah. He had truly loved her way back when. Not to forget there is also some feelings of guilt. He had promised to protect her against his mother and failed. Maybe that’s why in the present he can’t seem to make the same or even a similar promise to Emily.

Victoria had planted the idea in Sarah’s head and she’s running with it. She’s been sexting Daniel since she got hired to make his wedding cake. They occasional meet up just to say hey but finally Sarah was feeling guilt over Emily and told Daniel they should slow down. He manages to talk her out of that common sense.

Luckily no one is allowed to ruin Emily’s plan. She corners Sarah. Accusing the girl of sleeping with Daniel. She even throws in some tears to guilt trip the other woman. Sarah has no choice other than to claim she would never be a home wrecker. Most likely her little flirtation ended without Daniel ever knowing why.

Another thing on Emily’s plate is Jack. He concerned about Margot writing her expose on Conrad, He knows what happens when people cross Conrad. He wants to make sure Nolan at least stays out of it. However he learns something new. Not only is Aiden moving in with Nolan for the meantime but he’s also going to run away with Emily. He didn’t the two were together.

At Nolan’s, Emily and Aiden can start to enjoy themselves again. That was until Aiden got a cryptic message from Charlotte. She needs his help and somehow it involves someone sending her threatening messages. Her phone was stolen. The camera had several intimate shots of Charlotte. Whoever found the phone is now blackmailing her.

Conrad found out about Sarah and Daniel. Instead of trying to convince his son to dump Sarah, he says he keep her around…as a mistress. Emily is the perfect choice to be Daniel’s wife but Conrad a man needs more. That’s why he took him to his secret location. It’s a house where no wife has ever visited. Conrad’s father gave it to him to use for mistresses. The same way he used it in his heyday. Daniel doesn’t want to necessarily cheat on anyone but Conrad warns him to never make a mistress into a wife. You want variety then trade in your side piece. Changing wives is just costly.

It’s Daniel and Emily’s engagement party where to their surprise Sarah offered to help out. Victoria asked her to do it. But does it mean Sarah took up Victoria’s offer?

Aiden got Charlotte’s phone back. Yet he couldn’t stop himself from setting an example to Jack. He knows Jack doesn’t like him and he wanted to show he had his uses. He nearly beat Charlotte’s blackmailer into the hospital.

Victoria did have something up her sleeve for the engagement party. She invited Emily’s first husband. She thought it would be embarrassing when it turn out it wasn’t. She married Rohan so he could get a green card and be with his boyfriend. Daniel is perfectly understanding( or so he claims); Sarah isn’t. She saw how far Victoria was willing to stoop and no longer wants to be part of her game.

Daniel that debacle proved Emily is too cool under pressure. She’s like his mother. It’s why he invited Sarah over to his love shack. He tells her he’s breaking it off with Emily.

Victoria didn’t get her chance to humiliate Emily at the party but she’s not giving up. She gives Emily a card with a number on it. All this time the Gracen men thought their wives never knew about their secret place. Well, they were wrong. Each wife has handed the number to the house to every future wife. Victoria decided to give Emily the number as well. Emily calls it and learns Daniel is there with Sarah.

Jack later goes over to Emily’s. He wanted to know whether or not she really knows Aiden. He hated the violence Aiden was capable of. He wants to make sure she isn’t running with a guy she doesn’t deserve. She of course tells him to back off. Still, Jack had a point. Aiden is using Charlotte to help set Victoria up. If she knew about that then she would feel differently.

Emily did win Daniel back. She did it with a sonogram. Emily is saying she’s pregnant but is she? F she is then who is the father?

Lydia Davis, Conrad’s ex-fiancée, is back. Guess she didn’t die after all.