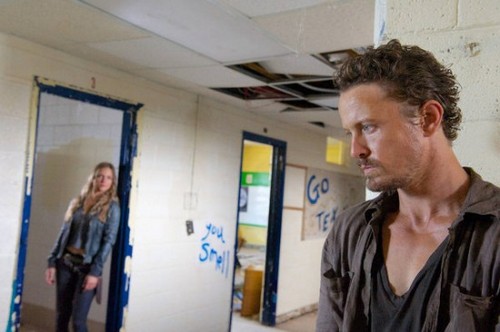 Tonight REVOLUTION returns to NBC with a whole new episode called “Everyone Says I Love You.”  On tonight’s episode Neville (Giancarlo Esposito) gives Jason (JD Pardo) a determined proclamation.  Did you see last week’s episode?  We did and we recapped it here for you!

Just when Miles, Rachel, and Charlie turned back to get Aaron something strange occurred. Everyone and everything ( like the birds) were laid out in front of the building. The same one in which was Aaron being held. They’re not dead though. They’re only knocked out and the last remaining signs of movement show Aaron escaped it all on his own. How did he do it?

The trio don’t have enough to investigate. Whatever fog Aaron put on the camp is slowly wearing off. Leaving them no time to look for Rachel’s dad. Later the patriots, awake and ready to hunt Aaron, realize their escape took his girlfriend with him. Miles believe this is one more nanos garbage they have to deal with but unlike his enemies; no one is his camp is listening to him. Rachel and Charlie both wish to return for Gene. Miles is hoping the patrol out canvassing the area will stop them from doing something stupid.

They continue on looking for Aaron and still manage to find trouble. If it weren’t for Monroe coming to their aid then they would have been captured. Not that Monroe saved them out friendship. He helped because Miles couldn’t die before he learned where his son was. Once he knows, he’s going to leave. Yet Miles is sick. He got an infection from his wound and he doesn’t want to leave his family to relying on only him. Unless Monroe stays to help recover Aaron then he will never know where his son is.

Neville got himself and Jason detail duty for Roger Allenford. This way the can be in power while doing what their used. Being military men. However there is one glitch. They were on a train when it suddenly stop to pick up more passengers. Neville went to check and found someone he wasn’t expecting. His wife, the one he thought was dead, and her new man.

The guys are back onto Aaron’s trail when they realized how quiet it is. The patriots aren’t in the woods anymore. They must have found Aaron.

Aaron had woken up in a store with an unconscious Cynthia. He didn’t know how he got there and was a bit throw when an eye witness told him he came on his own volition. The witness is a little boy. He says he’s looking for his parents and that’s why he’s alone. But unlike Aaron when Cynthia eventually comes to she can’t see the kid he’s talking about.

He immediately begins to freak out. Especially when the little boy told him it was them that saved him. Aaron wants to leave but Cynthia wisely tells him to stay. Get answers from this kid. Soon, Aaron realized why the kid look familiar. He used to play with a kid that looked just liked him. This boy is the nannites. He’s an A.I. This artificial intelligence tells Aaron he made them when he turned everything on. They simply want to help their creator now. In some cases that mean doing what Aaron was thinking – killing people. Aaron wants them to stop starting fires when they warn him the patriots are near.

Neville created an opening for his wife to come to him and when she did they “remembered” how much they missed each other. It seemed Julia thought both her husband and her son were dead. Under those circumstances she made sure to survive by remarrying. Neville, understandably, is upset. He told her he nearly killed the president in her name. She quickly advised him against that option. Julia being her ambitious self instead concocts a new plan. One in which their family can rise through the ranks.

The guys arrive at Aaron’s location but they’re surrounded. It wasn’t until Rachel and Miles were split from the rest of the rescue team did Rachel learn how sick Miles was. He was slipping into deliria when he told Rachel he was sorry. She was the one for him. The two had previously carried on an affair behind his brother’s back. Rachel had almost left her husband for him when he pushed her away. She knew he was lying about not loving her then. Finally she got validation.

Dr. Horn found Aaron and Cynthia. He wants Aaron to fix him like how he was able to heal Cynthia’s wound. He’s refusing to understand Aaron can’t control it. Out of spite, Horn shoots Cynthia. The little boy arrives when its too late. Cynthia is dead.

Aaron wants the people that hunted him to pay. He tells the boy to kill them all and so he does. But the kid won’t heal Cynthia. He says Aaron keeps giving him too many mix messages.