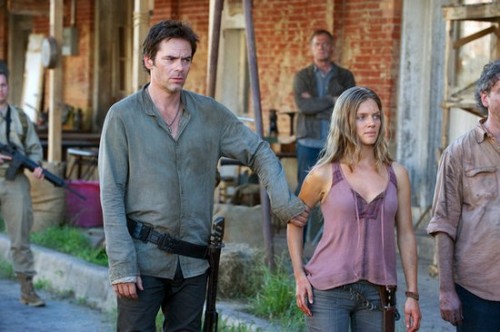 Tonight REVOLUTION returns to NBC with a whole new episode called “The Patriot Act.”  On tonight’s episode Charlie (Tracy Spiridakos) shares a moment with her mom as Neville (Giancarlo Esposito) and Jason (JD Pardo) continue with their struggles between father and son.  Did you see last week’s episode?  We did and we recapped it here for you!

On tonight’s show when Rachel (Elizabeth Mitchell) discovers some unsettling truths, Miles (Billy Burke) does what he does best to overcome obstacles before him and those he cares about. Meanwhile, Charlie (Tracy Spiridakos) shares a moment with her mom as Neville (Giancarlo Esposito) and Jason (JD Pardo) continue with their struggles between father and son.Also starring David Lyons, Zak Orth, Jessica Collins, Nicole Ari Parker, Steven Culp and Zeljko Ivanek.

Sebastian Monroe is alive. Rachel saved him by only making it seem like he died and then digging him uo from his grave later on. He was already awake by time she popped the casket. She brings him to Miles and Charlie and her work is done. Or so she hoped. It wasn’t long until another crisis grabbed everyone attention away from Lazarus. An explosion went off in town.

Aaron and Cynthia were caught up in the blast. They were relatively alright but Gene wasn’t. He knew within seconds why an explosion of that magnitude went off. He knew the patriots detonated it. He went to them thinking he could make them deter from such actions only to find they have bigger plans now. They claim someone else set off the bomb and that they have to protect the town by shutting the gates and upping their securities.

Gene had aligned himself with them out of desperation but now they’re enlisting Rachel to building something for them. Heavens knows what’ll they do if they get their hands on Aaron. Whatever they want he’s no longer going to be as accommodating. They’re not helping anymore. They’re simply destroying.

At one point he thought it would all stop. During early days he had helped them torture men. He was their doctor. Seeing that up close he had to be reminded at the time he was one of the good guys. Now he’s just done. He’s going to help Miles and Charlie sneak Aaron out of the town. He has a secret compartment in medical wagon.

Neville is still trying to win back his son despite Allenford telling him to give up. Jason says he’s alright but it could have been a trap. It wasn’t until Jason killed some of the patriot soldier so that his father could be safe did Allenford see. It will take a while yet Jason is slowly coming back.

It may be too late for Aaron. The new “doctor” in town wants answers from Gene. He’s heard the stories about Aaron’s resurrection. Back in the day he used to work with Rachel and so he has it in his head that Rachel must have done something to Aaron. Aaron tries to deny everything the guy throws at him but these people know what they’re doing. If he didn’t start talking then they were going to start killing.

Gene was going to help them capture Aaron but Miles was onto him. Miles and Rachel were in a prime position to watch her father betray them. Luckily, there was a plan B. Aaron and Cynthia have to smuggle out of the sewer line. The patriots are scouring all areas of the town when one of them decided to check the old sewer line.

Some guards caught the couple when they got ironically get saved by Monroe of all people. More patriot soldiers get in the way but Aaron’s “abilities” help save them. He can set people on fire using only his mind. Monore is impressed and Cynthia is a bit weary of Aaron. She’s scared.

Neville drugged Allenford. He wanted to teach her a lesson and she’s wakes up fine. At least physically but he has questions. Like where is her husband. The one placed in high command.

Charlie never got to hear why their original plan failed. All she knows is the moment her mother has a chance she begins crying uncontrollably . She didn’t know her mother lost her own dad today.