Rihanna Partying On Hard Drugs And Out Of Control – Eyewitness Accounts 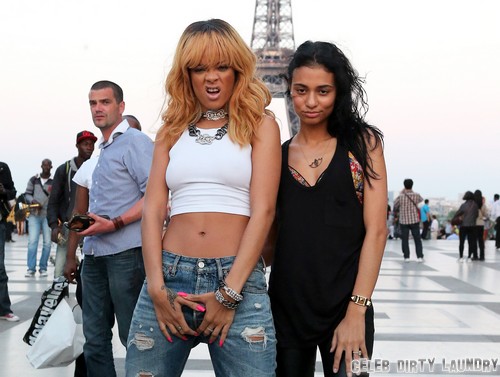 Rihanna, out of control? This is not the first time that Rihanna’s turned up hours late to a concert or meet-and-greet because of partying too much. Rihanna had a concert in Antwerp earlier this week, but she turned up hours late after partying until 4 AM the previous night, and fans at the concert say that she seemed drunk, stoned, and was lip-synching for most of the concert.

If this was a rare occurrence, you’d think that maybe she’s just having some fun and letting off steam. However, considering that it happens often, it’s pretty clear that there’s more going on behind the scenes. Professionalism in the music industry, especially for a big star like Rihanna, is incredibly important to their own public image. But right now, that’s the least of Rihanna’s worries.

Our private sources close to Rihanna say that while smoking and drinking are certainly two of Rihanna’s favorite pastimes, she’s also been spotted partying with hard drugs at various parties. While that’s not necessarily out of the norm for most musicians, it could explain why she’s been late to so many gigs lately. She was also more than three hours late to a Boston concert earlier in May, and it looks like this is becoming a habit for the star. She hasn’t apologized for most of the occasions where she’s been late and kept her fans waiting, and I wouldn’t be surprised to see her not apologize this time either.

Again, while it is norm for musicians to party and do hard drugs, especially at a young age, it should be worrying to people close to Rihanna that she’s not even able to make her own concerts on time. This is her career we’re talking about, and sooner or later, her behavior will come back to bit her in the ass. Her fans are loyal, but nobody is THAT loyal. Let’s hope she manages to get her shit under control before she ends up like the music industry’s version of Lindsay Lohan – without a career and spending stint after stint in rehab.

Rihanna and her friends snap some fun pictures in front of the Eiffel Tower in Paris, France on June 7, 2013