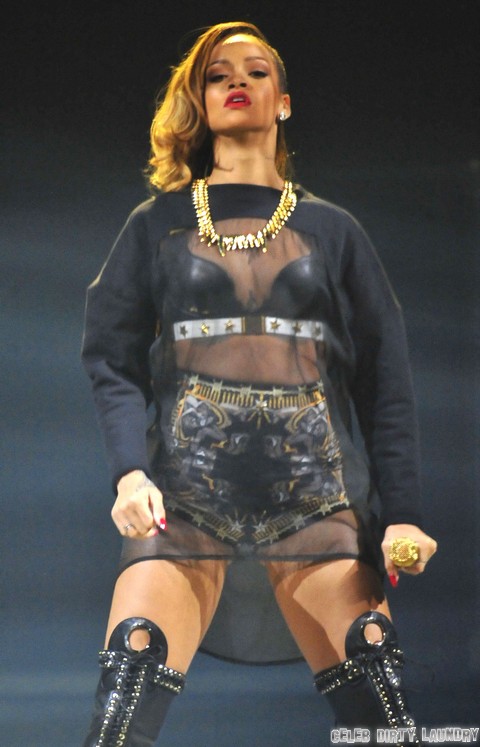 Rihanna made some high school students pretty happy. She stopped by a Barrington high school in Chicago. But she was five hours late! How nice of her! Was she too busy to fit these kids into her schedule? But the students didn’t mind apparently. Some of them said she was worth the wait! We hope she at least performed for those patient kids. But let’s hope she’s not a role model for them. She hasn’t been a good one lately! She’s practically the poster child for domestic abuse. But like RiRi said, it’s none of our business what she does with her life.

The High School got the sweet visit after winning the pop star’s ‘’Shine Bright Like a Diamond’’ video contest. Lucky kids! They must’ve blew her away with their video. It was only five minutes long and the students produced the video. Great job! The video highlighted Barrington High School’s volunteer and community service programs.

RiRi reportedly told the students she admired their passion and volunteerism. She should volunteer to come on time! She merely posed for some photos with kids before jetting off to her concert at Chicago’s United Center. She should’ve given away a few more tickets to her concert. That’s the least she could do for showing up so late. She didn’t even bother to acknowledge her tardiness apparently. Rude! And she only stuck around for sixteen minutes.

One seventh-grader was pissed off and had this to say, ‘’Rihanna is pathetic. She shouldn’t be making us wait for her.’’ Being called out by a seventh-grader? Yikes! This could be a new low for Rihanna! She should be more considerate to her fans next time. The world doesn’t revolve around her. Learn to R-E-S-P-E-C-T others. It’s all about the fans RiRi! Without them, you’re nobody. Remember that.

Rihanna performing live in concert at The United Center in Chicago, Illinois on March 22, 2013.