Rihanna Thrown Out of Mosque: Dresses Like a Hooker in a Hijab (PHOTO)

BY Epiphany Mattel on October 22, 2013 | Comments: one comment
Related : Rihanna 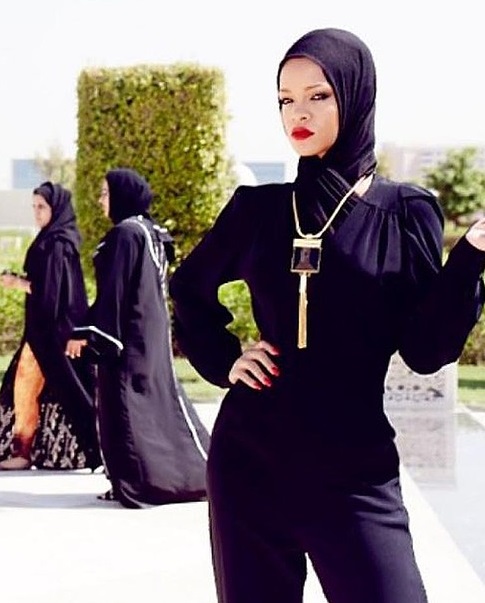 Alpha C**T of the week goes to Rihanna. That’s right our favorite bad girl. Who apparently feels that she can do what she wants, when she wants, and damn who she offends. Was asked to leave The Sheikh Zayed Grand Mosque Centre in Abu Dubai after deciding to do an impromptu photo shoot in a hijab with hooker red lips and no so modest gold jewelry.

Those of you who like Rihanna fail to see what the problem is. Here’s what the representative for the Mosque had to say that the photos were, “inconsistent with the sanctity of this religious place.” They went on to further to release the following statement though they didn’t bother to mention the “UNAPOLOGETIC” siren by name, “In the event of behavior that violates the moral codes of access to the mosque, or other visit regulations – such as taking inappropriate pictures, posing in ways that are improper in the context of sacred place, talking loudly, or eating – the violators are directed in a polite manner that reflects the civilizational and tolerant attributes of Islam.”

Now just like Ri-Ri I’m a slave for fashion and live to shock and awe. Yet there is a certain level of respect that everyone should give regardless of who you are. Take Madonna for example she’s worn a nun’s habit, had foreplay with a priest, and burned crosses but she didn’t do it at the Vatican. I mean basically Rihanna did a Rick James walking in to Eddie Murphy’s house jumping on the couch with muddy boots screaming “F**k yo couch , n**ga !!!”

I guess Rihanna and her minions felt it would be edgy like “look at me I’m sacrilegious ! I’m the baddest bitch!! I’m so couture. When in reality she made herself look like a total ass when she put on this religious attire only to disrespect the meaning to feed her own ego. Hell Ri-Ri I’m pretty sure you don’t plan on releasing any hijabs to accompany your River Island Collection.

Anywho Rihanna is in Dubai on the United Arab Emirates leg of her “DIAMONDS TOUR.” Make sure you catch “Babygirl” Nov. 5 at 8 P.M. for the premiere of her new reality series “STYLED TO ROCK” on THE STYLE NETWORK, where RiRi is not only a mentor to the contestants but also the show’s executive producer.