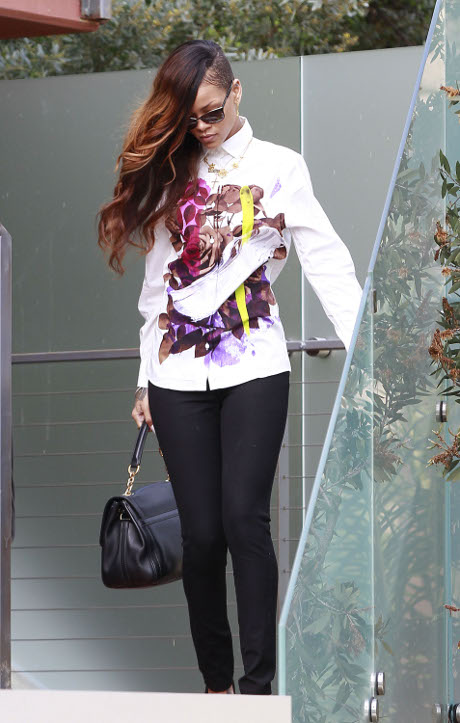 The Rihanna and Chris Brown relationship is one celeb romance that I will never understand. No matter what Chris does, no matter how he acts or how he behaves, Rihanna is right there by his side. I don’t think anybody will ever truly comprehend RiRi’s thought process behind her love for Chris Brown, but what people are noticing is her total disregard for Chris’s violent behavior — both in the past and in the present.

Chris Brown is a bully. And Rihanna doesn’t seem to mind much. She still claims to be in passionate-I-can’t-live-without-him love. Do you think this relationship is a healthy one, is it all right, for herself and for the image she’s promoting to her young fans? Is Rihanna, whether she realizes it or not, reinforcing violent behavior?

Reinforcing may not be the correct word in this situation. But Rihanna definitely doesn’t rank VIOLENCE and ABUSE very high on the Not-Good-For-Relationships List. In many ways, she disregards it or chooses not to make a big deal about it. Her recent court appearance alongside Chris Brown emphasizes this unhealthy perception.

When Rihanna accompanied Chris Brown to his court appearance yesterday, she was front row and center to “cheer” on her sometimes-most-times boyfriend. Let me remind you . . . . This trial is concerning the terms of his probation dealt to him upon violently assaulting Rihanna back in 2009. Not only was Rihanna there, but she blew a kiss to Chris from the audience. Am I the only out there who thinks this is just a tad messed up?

Prosecutors also cited his instances of recurring outlandish and violent behavior — as yet another reason to reconsider his probation time. The event they cited was the recent fight he had with Frank Ocean over a freaking parking spot. He threw a chair through a window after a Good Morning America interview. But he doesn’t have anger issues, right, Rihanna? *Sigh*

Let us know what you think of this relationship of perpetual confusion, unhealthiness, and Chris Brown violence. Is Rihanna unintentionally reinforcing violence? Or is it just tough love?