Rob Kardashian Charged With Battery and Theft Crimes – Will He Go To Jail? 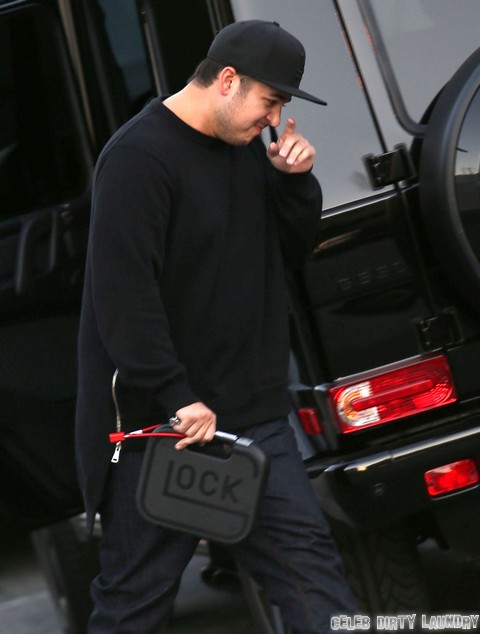 And now for the latest trainwreck in the Kardashian Klan… Rob Kardashain has been formally charged with two misdemeanors following the March 27, 2013 incident when he allegedly stole a memory card and smacked an Enquirer photographer in the face after she snapped a shot of him looking pudgy and shirtless following a workout in Beverly Hills.

Rob was taken into custody after the incident and released without charge pending investigation.  Well that investigation is complete and charges were filed May 7, 2013.  Now the violent bully faces battery and petty theft charges and is also being sued by the female photographer whom he allegedly assaulted.

Sources here at Celeb Dirty Laundry say momager Kris Jenner had been searching for the photog in question in order to pay the woman off and quash the case. Now that the law has charged Rob a simple bribe will no longer suffice.  Anyone familiar with the family knows Rob’s temper is short and this is not his first violent incident in public.  One can only assume Rob’s temper is even worse since he has turned into a fat slob following his very public split with Rita Ora.

One has to wonder what the Matriarch of the family is doing right now in the face of such charges. Some say Rob needs to be held accountable for action stemming from his notorious short temper. But Kris has her thumb so securely on this entire family that you have to consider how she will try to spin this to benefit the Kardashian money making machine. A plotline for Keeping Up with the Kardashians perhaps? Nothing seems too crude and vulgar for these reality career whores. Anything to take the attention off of Kim’s very bad maternity fashion choices and rumors of Kanye’s infidelity might be helpful. But really, who cares about Rob? That’s the shadow he lives under. At least he made the news for once.