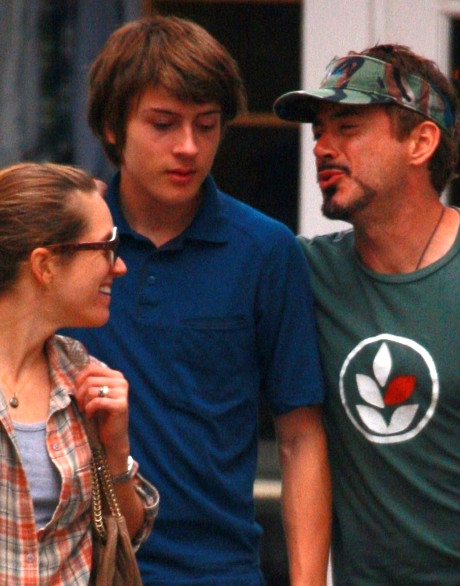 Robert Downey Jr. is no stranger to the life of addiction, and now it seems as if his oldest son, 20-year-old Indio Downey, is seeking help in rehab for his addiction to prescription pain medication. Apparently, Indio’s mother, Deborah Falconer, confirmed to the National Enquirer that he has sought treatment. However, she also noted that we wasn’t necessarily “addicted,” as he was only taking one pill a day. But, in my opinion, when you don’t need the meds, then one-a-day is one too many. It’s not a vitamin, folks. If Indio’s addiction is true, then we’re so glad he’s seeking treatment while he’s still young and his body malleable.

“He was not addicted,” says Debbie. “He was taking one pill a day,” and his rehab primarily consists of “holistic, natural and orthomolecular” treatments. “We are hoping to do it the homeopathic way rather than with medications.”

“This is a nightmare for Robert because his boy has never been in trouble before,” a source told the Enquirer. “He’s praying for Indio’s recovery.”

Deborah was married to Robert, but she eventually left him in 1996 after his own struggles with drugs and alcohol, which resulted in his arrest (oh, and he was also charged with the possession of a weapon). We hope Indio (cool name btw) receives the help and attention he deserves, and for some reason we feel as if Robert will be a good rock and support for his son during this difficult time. What do you think about this father-like-son situation?