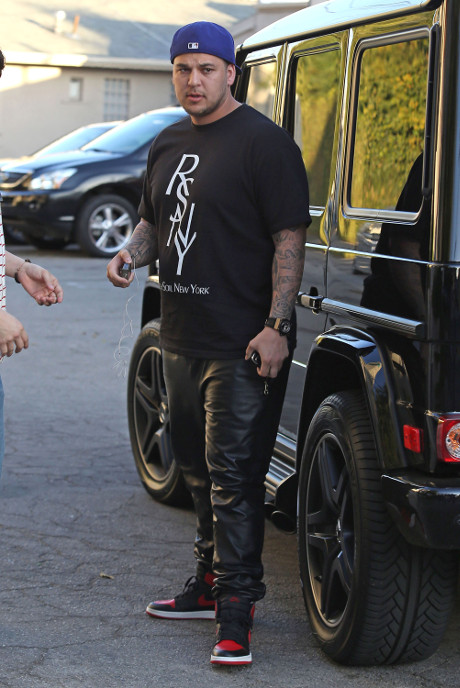 Does Rob Kardashian have a son, one he’s keeping secret and locked away from the rest of the world? According to some sources, Rob does have a son, and he made the accidental reveal while hosting some friends at his apartment. His friends noticed a teddy bear sitting on his bed and, when they asked who the toy was for, Rob said that the present was for his son. More insiders reveal that Rob told them that his son was the result of a Miami fling four or so years ago.

An insider for Radar adds, “The possibility that Rob may have a child has been the buzz in the Kardashian circle for a while, but no one knows for sure. And no one will talk about it.”

Many people might not be quick to believe these outside sources, but Rob has personally commented on his mystery child a couple times via his social media, oftentimes shrouding the reveal with humor — perhaps the reason why most aren’t treating this situation as seriously as those closer to Rob.

This past May, Rob posted a note (which he quickly deleted) on his Instagram account: “Shout to to God … Shout out Mom, shout out to my son’s mom cuz she been holding me down since high school n shout out to my son Robert the Third. lol”

And then there was this Twitter exchange with Nicole Richie:  “Bout to take time today to see the ones whom I never se …” he wrote. And when Richie answered, “Like your son?” he wrote, “My son unfortunately doesn’t stay in L.A. You know that. Don’t remind me.”

While those messages seem more playful than serious, a family insider reveals that Kris Jenner, the queen of the Kardashian Empire, is worried that the existence of Rob’s son could somehow damage their brand — so maybe Rob’s son is more real than anyone realizes.

“Any time it’s even mentioned, Kris changes the subject,” says a family insider. “For whatever reason, Kris is fearful that Rob being a father could hurt the [Kardashian] brand.”

Do you think Rob Kardashian has a son? Let us know your thoughts in the comments section below.