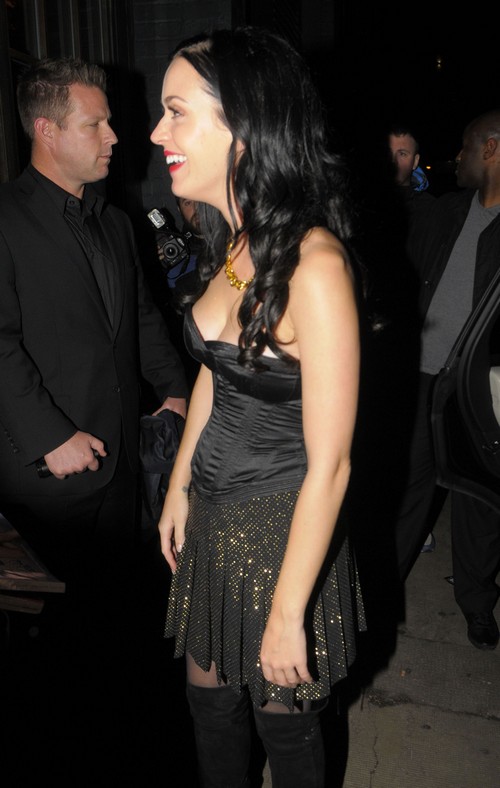 Katy Perry and Robert Pattinson have been friends for a very long time, but according to Katy, that’s all they’ve ever been. Um, sure Katy, whatever you say.

Although speculation about Katy and Rob dating is nothing new, there was renewed interest in the rumors after a leaked video showing Katy and Rob singing drunk karaoke in 2008 was released. In 2008, Rob was still single as was Katy, and in the video, Katy is seen leaving her chair to sit on Rob’s lap during the song.

However, when she was referencing the leaked video during an interview on the Kyle and Jackie O Show, she laughed it off, explaining, “Nothing is sacred, not even karaoke. One of my best friends is a mutual friend of ours, and we got wasted and did karaoke like people do.” She also adds, “At least it shows you that we’re actually just friends. It’s like if you’re a girl you can’t be friends with that guy … The poor guy. I feel for him.”

It is true that Katy is pretty friendly with most guys she meets, but sitting on someone’s lap is pretty intimate, no? Also, it could be true that Katy and Rob actually never ‘dated’, per say, and were always just friends with benefits. I refuse to believe that absolutely nothing went on between them, especially if they were both single at the time. The two were constantly spotted in each others’ company in those days, and it’s obvious that they’ve always had chemistry. So while I believe that they were always friends and might never have stepped into official ‘dating’ territory, I don’t think Katy’s being genuine when she says they were ‘just’ friends.

What do you guys think? Do you think Katy and Rob were friends with benefits, or have they always stayed just friends? Let us know your thoughts in the comments.