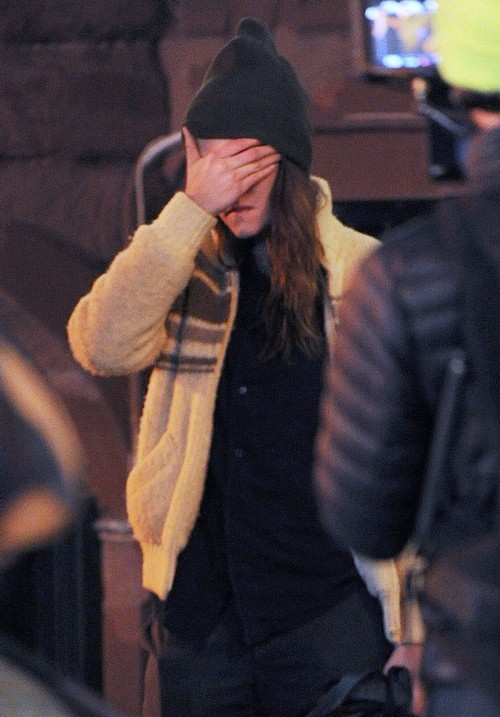 What’s going on with  Twi-hards’ favorites are-they-together or are-they-not couple? I think we came to the consensus that Robert Pattinson and Kristen Stewart are hooking up, but not necessarily ‘dating’ per say. And when I say ‘dating’, I mean the whole shebang – the holding hands, spending every free minute together, staying at each other’s houses, etc. Rob and Kristen have the staying at each others’ houses part down, but the rest is messy.

See, both are very busy filming back-to-back films, and they rarely seem to be in the same city twice. However, when they are together, they don’t necessarily seem to spend all their time together. Sure, they’re avoiding the paparazzi, but that never stopped them before, when they actually were ‘dating’.

Rob was also recently spotted at the VMA afterparty hosted by Jennifer Lopez at Chateau Marmont, his seemingly favorite Hollywood hotspot. He was reportedly spotted with two females and tall blonde guy, but nobody seemed to recognize Kristen there, and there’s no way that no one would have noticed if she actually was there. Granted, she was probably busy filming, but the overall point is that they’re rarely spotted out in public together, whether walking together or even partying together. So friends with benefits? Sure. Dating? Definitely not right now.

And besides, Rob still has plenty of options, and it’s not like he has to get back together with Kristen. In fact, it’ll probably be better for him if he doesn’t, since there’s no guarantee she won’t cheat again and there’s also considering his public image taking another hit.

What do you guys think? Should Rob get back together with Kristen ‘officially’, or should they just let things happen at their own pace? Or do you think Rob should just stay away from Kristen and try to move on? Will Rob refuse Kristen’s pleas for a Thanksgiving date? Let us know your thoughts in the comments.