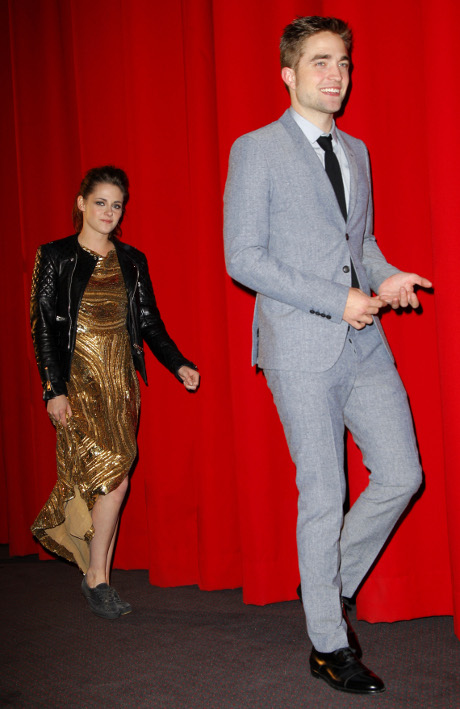 I don’t think Robert Pattinson could possibly look anymore sullen. The Twilight actor, on the edge of (another) rumored split with on-again-off-again-most-times-on-again girlfriend Kristen Stewart, was seen in Australia recently dressed in black jeans, black hoodie, paired with a black hat and black sunglasses. He also carried a guitar, and let’s hope to the heck that he isn’t planning on writing a break up song in the style of Taylor Swift. Wouldn’t that be a disaster?

Now, I’m not entirely convinced yet that the Robert Pattinson and Kristen Stewart split is legitimate, but Robert allegedly called the relationship off the weekend after they had a tough holiday break. What do you think? Do you think Robert and Kristen are officially done-zo? It’s hard to be sure anymore, but I think it’s safe to assume that the couple is experiencing another rough patch. But, aren’t they always traversing rocky romantic patches?

Rob is apparently in Australia for some work on a film, and the rumors say that Kristen, simply put, will not be visiting him while he’s there. I think it’s safe to say that Robert is still feeling a little uncertain after Kristen Stewart cheated on him this past summer. While nothing really became of her slobbery relationship with Rupert, the fact that she was unfaithful has R-Pattz on the defensive. She cheated once, so who’s to say she won’t step down that shady path again — maybe with a future director?

Can we please just go back to his ridiculous outfit (click here for pic). Rob has been seen in that outfit before, also at an airport, so I’m beginning to think that those are both his travelling clothes and the outfit he wears when he’s sad . . . . or maybe he’s jumping for joy on the inside. Maybe he couldn’t be happier that he and Kristen are currently experiencing *yet another* break. So, I will revise my previous conclusion. Perhaps that all-black set of clothes are the things he wears when he’s overjoyed.

At one time, they were in talks to be engaged, and later married. Apparently that whole situation has been put on hold. Good choice?