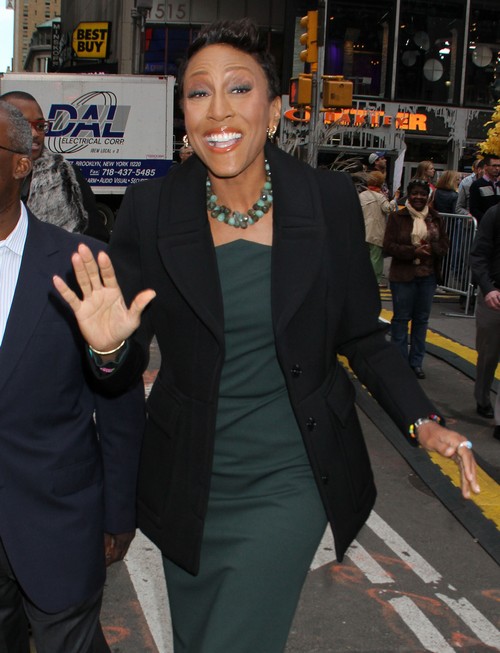 Robin Roberts announced this past Sunday that she was gay. She’s now officially out of the closet. The long-time newswomen has kept this part of her personal life secret since she began as a sports newscaster back in 1983. Although many weren’t surprised about her sexuality, they were shocked to hear about a long term relationship. No major fuss was made over her announcement if it truly be call that. Robin simply acknowledged herself as gay without the fan fare. She made a small statement on her Facebook page and that was it.

“At this moment I am at peace and filled with joy and gratitude,” the “Good Morning America” anchor continued before noting, “I am grateful to God, my doctors and nurses for my restored good health. I am grateful for my sister, Sally-Ann, for being my donor and giving me the gift of life. I am grateful for my entire family, my long time girlfriend, Amber, and friends as we prepare to celebrate a glorious new year together.”

See, it’s as simple as that. There was no need for an overlong speech like Jodie Foster’s. Still I would like to point that I do feel a little bad for Amber Leign. To be a supportive girlfriend through what seems like a never ending constant battle with cancer takes a lot. Both physically and mentally! And yet this is the first time she’s been acknowledged or even publicly thanked. She probably didn’t need that affirmation but I’m glad she got it.

We tend not to discuss gay marriage and I’m not saying Robin is or should marry her but if something had gone wrong in Robin’s care then Amber wouldn’t have been allowed to have any say in her treatment. No matter the fact she’s been there from day one. So there is a reason why the gay and lesbian community have been fighting so hard to legally be recognized as each others’ spouse. During this time when many are granted this basic human right we can also now put at least another face to what the majority are willing to dismiss without a thought. They are people and in Robin’s case, it is someone we’ve come to know, love, and hope for nothing but the best.

Nothing should change in that regard after today!