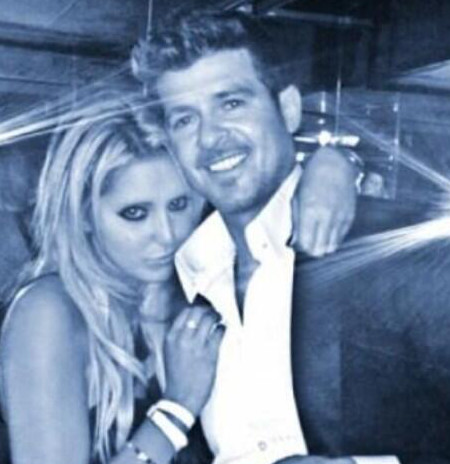 When Miley Cyrus humped on Robin Thicke, everyone wondered what Robin’s longtime wife, Paula Patton, was feeling. According to Paula, she and Robin have a wonderful marriage and it certainly seemed that way – until now.

And for those who are trying to defend Robin, give me a break. For some reason, people try to pass off groping another woman as a one time thing, but if he’s the type of person to grab a woman’s ass, why wouldn’t he be the type of person to hook up with that woman? And FYI, he clearly didn’t know that people would find out because if it wasn’t for the mirror in the background, nobody would have known that he was actually grabbing her ass. In his thought process, he must have thought, well nobody’s going to see if I cop a feel in this picture – but alas, he forgot about the mirror, which just happened to be reflecting everything that was going on. The picture managed to capture everything, and his sleazy ways have been made public.

What do you guys think? Do you think Paula will react to this or will she try to make excuses for her husband? They have been together for a very long time, and this is the first time reports of cheating have come forward. Let us know your thoughts in the comments.