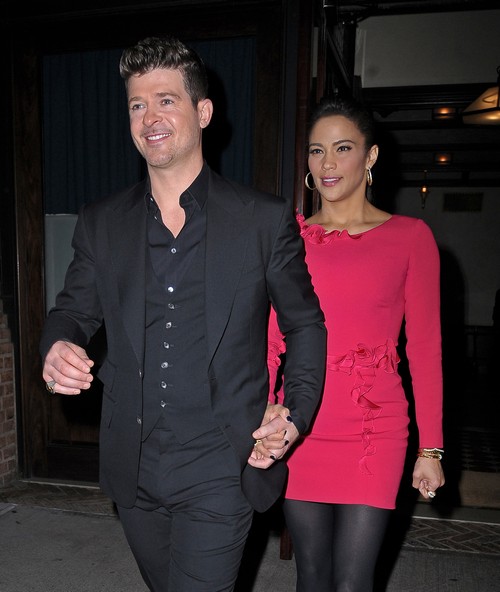 Robin Thicke doesn’t seem to understand that there’s a time for talking, and there’s a time for keeping his mouth shut. He’s already taken a huge hit to his reputation in the wake of all the cheating allegations, and although most people have realized that his marriage to Paula Patton seems to be un-traditional in that regard, it’s not like it’s won him many new fans.

Robin and Paula have been married since 2005, but the details of their married life are a bit strange. Robin pretty much admits that they don’t live [or love] traditionally when he explains to Elle Magazine, “We’re overspiced. We could probably take a few spices off the shelf.” He explains that they both enjoy having sex to his music, adding, “She likes to do it more than ever now. Sometimes she’ll even play groupie for me.”

I think that pretty much sums up their relationship in a nutshell, doesn’t it? Robin’s an egomaniac, so OF COURSE they have to listen to his music when they have sex. And playing groupie? Well, if the rumors are true and they have are actually proper swingers with threeways and groupie sex, then why would this be any different? Besides, I’m sure Robin’s actually had plenty of groupies in the past, so when he’s not with them, he makes his wife pretend to be one.

I mean, it’s one thing to not be traditional and have an open marriage, but it’s another to be so blase about it. In addition, Robin’s ego seems to be getting out of hand lately, and with the success of Blurred Lines, I doubt Paula’s going to dump his ass anytime soon. Not when her entire career is built on the fact that she’s Robin Thicke’s wife.