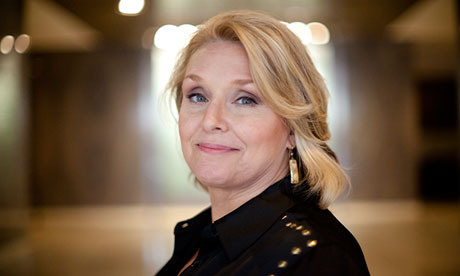 Samantha Geimer has been through a hell of an ordeal for the thirty seven years, and she’s finally come out with a tell-all book telling her side of the story. Geimer was raped by Roman Polanski thirty-seven years ago, although his version of the story is completely different. No matter how you slice it, Samantha was a thirteen year old girl who was taken advantage of by a lecherous older man.

While most of the details of the case are well known, reading them in Samantha’s own words makes it that much more viscerally disturbing. She explains that as soon as she got to the photoshoot, he asked her to take her shirt off – and she writes, “My ticket to stardom showed up again. … Sure the last time was super-uncomfortable, but that was the price of fame.”

Later, they headed to Jack Nicholson‘s house and Samantha reveals that Roman first got her drunk on champagne, and then had her take a Quaalude tranquilizer. Basically, he drugged her so that she couldn’t fight back. She reveals that she knew everything was going too far when Roman got into the hot tub with her.

She details the following incident, explaining, “I want out. Now. How f*****g stupid could I be? It’s a hard thought to hold on to. The water is hot, and the steam is rising into the night … I knew this wasn’t right … He pulls me a little closer by the waist and helps hold me up a little and moves me above one of the jets so I can feel the bubble tickling up between my legs. … There’s nothing good about it, but I know what he’s getting at. Then everything hits at once. The steam, the heat, the alcohol, the pill and the panic. Have you ever been touched in a way that made you want to jump right out of your skin? This man had a reputation as a great lover. The problem is, he was not my great lover. I could have been any girl, as long as I was female and as long as I was young.”

She reveals that Roman refused to listen to her refusals and started kissing her and performing oral sex, and eventually, she just gave up and her mind went ‘far away’.

Ughh, how disgusting. Roman Polanski should be arrested and thrown in jail for this, but he’s managed to stay in countries without extradition policies to the US. It’s unfortunate that the international legal system essentially lets him get away with rape, but what can you do? I wish someone had the guys to drag him back here on his hands and knees, but I don’t see that happening any time soon – especially with the astonishing amount of support he seems to have in Hollywood.