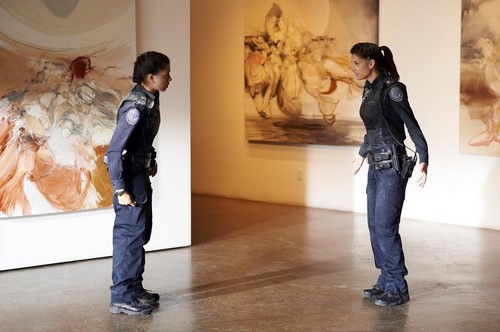 Tonight on ABC ROOKIE BLUE continues with a new episode called, “Skeletons.” On tonight’s show a young women goes missing, propelling 15 division back to one of their most traumatic cases to search for a copycat kidnapper.  Did you watch last week’s season premiere, we did and we recapped it here for you!

On last week’s show Andy was ready to get away for a much-needed long weekend when she and Gail, worked a routine highway spot check, discovered a teenage boy bound and gagged in the trunk of a car. The two found themselves plunged into a messy tale of young love gone wrong and had to  try to save the boy from making a tragic mistake. Meanwhile, Swarek, Oliver and Chris were hot on the trail of a gunman who shot a 16-year-old who may have gang connections.

On tonight’s show rhe investigation of a missing girl is linked to a possible copycat of one of the squad’s most gut-wrenching cases. Detective Luke Callaghan is brought back to 15 Division to help capture the abductor. With the clock ticking, Gail is forced to confront her worst fears in order to help solve the case. Meanwhile, Traci realizes she must move past Jerry’s death, and Andy and Sam work together again, coming face to face with their past and the real reason for their breakup.

Diaz is gone but he only told one person the other day was his last day and it wasn’t even his friends that joined the Department with him. Dov is taking it personally. Why shouldn’t he? Diaz was his best friend and no matter what Oliver tries to tell him.

Their department is just full of surprises today. Gail’s brother comes by. Traci can see the obvious resemblance right of the bat. Not in looks but in temperament. And to finish off a day’s work Andy and Nick pick up a stolen taxi cab that was once used by Jerry’s killer.

The same cab that was used in a recent abduction. Luke comes back to the station to help find what could be a copycat or possibly an accomplice. Everyone is on edge. Especially Sam and Gail. Sam is out investigating and he chose Andy to accompany him. He explains, after she tries to talk, that he chose her because she was there and knew he wouldn’t and didn’t want to talk about it.

They track down the cab owner and despite him being a jerk he does have an alibi. He sold the cab a while ago. Back at the station new information emerges. The same drugs used in the original case were found in the cab. They have to get answers yet Ross refuses to speak to anyone unless its Gail. Frank didn’t want to her but she overheard and demanded answers.

Traci just caught on that Steve Peck was only a distraction. She wants to know what’s going on so he explains about the copycat. Before she goes rushing off, he warns not to interfere.

Gail was being eaten up by guilt. The victim’s father had used her for a reason to hope. Yet she knew they weren’t getting anywhere in the case. She volunteered to go and speak to Ross. There’s some hesitation but she goes in. Gail goes to see Ross and the first thing he does is try to exchange secret for secret.

Dov and Oliver had unknowingly spoken to the accomplice earlier. The man had claimed to be neighborhood watch and Dov had brushed him off. They realize they had him and accidentally let him go. At least now they know what he looks like. Ross’s information on the guy leads the police to believe that this guy could be worse than Ross.

Gail doesn’t know that Nick is behind the mirror watching the interaction. Luckily she told the story about killing a family over cheating on Nick. That is until Ross keeps pushing and Gail admits the truth. She goes frustrated and is about to walk out when Ross finally reveals his cards. The copycat was the prison librarian. The guy was released two weeks ago. From his info they are able to find the girl but Nick now knows what Gail did.

Steve had stayed with Traci through the whole thing and she was able to open up to him. He helps her get her mind of the situation. There’s even some flirtation between them.

Oliver and Dov are finishing their day at which time Oliver admits he’s getting a divorce. He had used the same words to cheer up Dov that he read in books to help himself.

Nick and Gail finally have time to talk and it comes out that Nick does have a crush on Andy. Gail knew because there was a moment Nick could have visited. He decided to go away with Andy for a weekend instead.