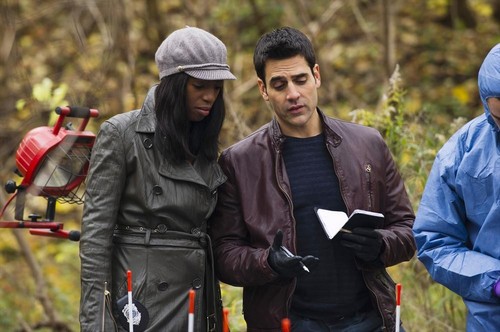 Tonight on ABC ROOKIE BLUE continues with a new episode called, “Friday the 13th.” On tonight’s show a night of superstition and pranks leads to a gruesome revelation and a step back in time for Swarek. Did you watch last week’s season premiere, we did and we recapped it here for you!

On last week’s show the investigation of a missing girl was linked to a possible copycat of one of the squad’s most gut-wrenching cases. Detective Luke Callaghan was brought back to 15 Division to help capture the abductor. With the clock ticking, Gail was forced to confront her worst fears in order to help solve the case. Meanwhile, Traci realized she had to move past Jerry’s death, and Andy and Sam worked together again, coming face to face with their past and the real reason for their breakup.

On tonight’s show the grisly discovery of human bones in a ravine re-opens a 15-year-old missing persons case, and Swarek teams up with his old training officer, Charlie Walsh, in an effort to close the case. But an up-close-and-personal look at Charlie’s life makes Swarek think twice about whether he wants to continue in his mentor’s footsteps. And a weird night gets even stranger when Chloe and Dov can’t agree with how to deal with a witch and her disgruntled client.

Dov is still trying to win back his ladylove after the whole bipolar accusation. Yet surprising her in the shower as if he was Norman Bates doesn’t win her over as much as he thought it would even if he’s carrying a gigantic heart cookie.

Later the two are about to get into a squad car when they get confronted by a witch. At least a woman claiming to be one and she needs help. Chloe is all go ho and Dov wants to be skeptical that is until he believes he’ll win brownie points if he plays along.

Sam on the other hand is finding his hands full. He and Andy are still showing some intimacy and completely forgetting their broken up. Meanwhile his real girlfriend appears to be on edge when she sees her therapist. The therapist is a little bit worried although Cruz claims she’s fine.

She better be she and her squad partner Gail found the skeletal remains of someone that went missing 10 years ago. Sam had worked the case before and it’s his case now. The first thing he does is go to the former detective on the case. A funny older man who’s enjoying retirement by not changing out of his bathrobe.

Sam was the one to break the news to the victim’s father. The poor man is pretty torn up and yet that doesn’t stop him from pointing a finger to his son’s best friend. Then there’s the best friend that’s pointing a finger at the father. The very same father that freaked out when Sam didn’t take off his shoes. The friend claims the father was always uptight but he used to beat his son.

The witch case is interesting. The woman that robbed her become violently ill and passes out during booking. Other than that she seems to have Oliver either wanting to date her or be scared of her. The witch could be in trouble. Her client was supposed to take a bath in the love potion and now its looking like the client eat the potion.

The romantic entanglements continue with Andy and Nick. Gail had put the two together for patrol. But what was she trying to do? Give Nick a free pass. Nick is in a mood over Gail and he doesn’t feel liking opening up to anyone. Especially not Andy
They enter a large and pretty much deserted warehouse and for some reason Nick is acting spooked. So much so that he called for backup on what turned out to be a mannequin.

Sam’s case just got dirty as in dirty cop. His mentor and friend forgot to tell him about a secret deal he made with the victim’s father. The deal was the father didn’t go tracing his son and the detective wouldn’t file charges. Sam already suspicious looks into the information on why everyone thought the kid ran away to Texas and he found his friend had falsified the records.

There’s only one thing left for him to do and that is to confront the guy. His friend was drunk and driving on the same road where the teenager was last seen. He had hit the kid and believing he as dead dropped him in the river. The kid was alive and he could have made it if only the ambulance was called.

Sam decides to cover it up and he almost makes Traci go along it but his mentor turns himself in.

Even though the client was stupid swallowing the potion it still worked. Her ex came running to the hospital when he found out about her being sick. Also Chloe got to be soften by the romance of it all that she manages to take Dov back.
Sam is regretting not having Andy around for conversation. It makes him turn to Cruz and open up to her. Although she doesn’t return the favor.