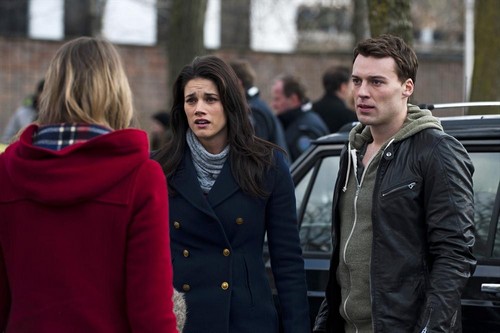 Tonight on ABC ROOKIE BLUE continues with a new episode called, “What I Lost.” On tonight’s show a city-wide search for Chris’ son ends with a bombshell discovery that will change his life forever.  Did you watch last week’s season premiere, we did and we recapped it here for you!

On last week’s show everyone at 15 Division was looking forward to celebrating at Frank and Noelle’s wedding. But when a casino-bound bus full of seniors citizens was robbed at gunpoint, all bets were off. Meanwhile, the wedding preparations went awry when Traci discovered the bride had disappeared, and Andy’s day took a 180-degree turn when she and Nick shared a strangely intimate moment.

On tonight’s show Chris’ reunion with his rookie family takes a shocking turn when his son, Christian, is kidnapped while in Andy and Nick’s care. As the squad spreads out to search for the boy, Swarek is confronted with Andy and Nick’s budding relationship. As our officers discover clues to the identity of Christian’s abductor, Chris is slapped with a stunning revelation that might tear his new family apart.

Chris and the Diaz Family are back. No not permanently. They’re only in for a visit. Yet they’ve come at the worst time. Gail isn’t a pleasant person on a daily basis and yet she’s recently have been coming off the blind dates from hell that her mother set her up with.

Also there’s Andy who attracts drama. She’s thinking about where to take her relationship with Nick. Luckily their conversation was suspended because she was watching little Christian. She had just finished putting him in his car seat when they noticed an apparent heart attack. Andy was making the 911 call while Nick was performing CPR. The dispatch was asking for info that Andy didn’t know so she ran over and handed the wife her cell but when she got back to the car; Christian was gone.

Andy is freaking out. She’s brought back to the station to give her statement but for some reason Sam is being extra harsh taking her story. Later Nick tries to tell him to take it easy on her when Sam implies that it’s none of his business.

For a guy that was only earlier playing house with Cruz his sudden jealous literally comes from left field. At least Cruz is getting somewhere with the investigation. She tracks down a man whose brother owns a candy store. He was once questioned in another little boy’s disappearance and they never did find that boy.

Chris is furious and he wants to help look but Traci warns him he’ll only get in the way. At first he was willing to comply then he saw Denise’s face. She’s falling apart more than he is. He almost convinced Dov to take him with them as they make an arrest before better judgment won.

Cruz and Sam do track down the Candy Man who refuses to give them anything. They’re so sure he’s the guy they can’t help to bring up the other little boy that disappeared. Yet they’re wrong. He doesn’t have Christian. Nevertheless that doesn’t make Cruz feel like the guy is innocent.

An anonymous tip about toddler screaming at the movie theater leads to the real culprit. The surveillance camera revealed that Christian was kidnapped by his former soccer coach. Chris can’t believe he missed it. The coach was always paying Christian extra attention. Feeling like a horrible and worse father, Chris takes a chair smashes glass all over the place. Then Chris being neat and sweet injures himself trying to clean it up.

Gail was in the medical lab awaiting results of blood analysis found in the car when she receives shocking news. The coach, the guy that took Christian, is actually his father. Dov immediately takes the results and confronts Denise with them. How exactly does it escape her mind that they guy she must have slept with around conception would want to steal her son? To anyone else they would have instantly thought of paternity. Not Denise.

Now she’s too busy trying to explain to Chris. Although Chris understands. He tells her that the DNA results won’t change anything. They’re still a family. He uses Denise to contact Jean to set up a meeting.

The cops flood the place and catch him but even as Andy has a smile for Chris and Christian being reunited who thought of Jean. He did kidnap his son but when he was setting up the meeting with Denise it was revealed he had tried to contact her before. He suspected he was the father and because she was playing happy family with Chris, she ignored him.

Jean had made an agreement with Denise. He wasn’t granted an official custody agreement yet she allowed him to have quality time with Christian. That is until Chris came back on the scene. After that she just ignored Jean no matter how many time he tried to contact her.

Anyway he doesn’t have a clean record so he knew he wouldn’t be granted custody. Kidnapping his son was the actions of a desperate person.

Everyone is worried how Chris is dealing with everything. Well, he’s angry. Denise let him believe Christian was his when he knows now she essentially gave the little boy to him. That isn’t the same as belonging to him. Chris gave up everything for his family only to find out it was a sham.

Andy and Nick finally hook-up. Guess they figured they shouldn’t feel guilty any longer now that Christians is back with his parents. Maybe they should have started to think about Gail. That could have ruined the mood.