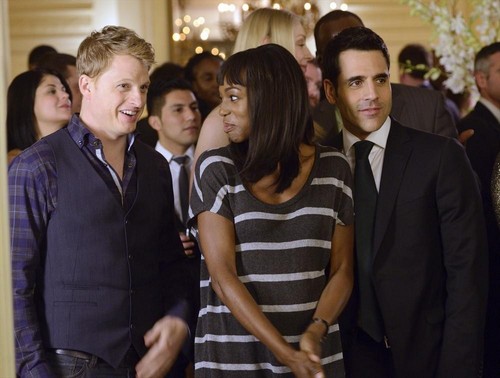 Tonight on ABC ROOKIE BLUE continues with a new episode called, “For Better, For Worse.” On tonight’s show Frank and Noelle’s wedding day proving be an emotional rolleroaster ride — and not just for the bride and groom. Did you watch last week’s season premiere, we did and we recapped it here for you!

On last week’s show the grisly discovery of human bones in a ravine re-opened a 15-year-old missing persons case, and Swarek teamed up with his old training officer, Charlie Walsh, in an effort to close the case. But an up-close-and-personal look at Charlie’s life made Swarek think twice about whether he wanted to continue in his mentor’s footsteps. And a weird night got even stranger when Chloe and Dov couldn’t agree with how to deal with a witch and her disgruntled client.

On tonight’s show everyone at 15 Division is looking forward to celebrating at Frank and Noelle’s wedding. But when a casino-bound bus full of seniors citizens is robbed at gunpoint, all bets are off. Meanwhile, the wedding preparations go awry when Traci discovers the bride has disappeared, and Andy’s day takes a 180-degree turn when she and Nick share a strangely intimate moment.

RECAP: Nash is having car problems, Dov is in the station and Chloe tells him that he can’t keep their secret much longer, he tells her that he can keep it forever. Oliver tells Dov that he is not going to the wedding because Zoe is going there with her no flame. Gail has nobody to go to the wedding with since she broke up with Nick. Andy is in the car singing and excited for the Noelle’s wedding. Meanwhile, Nick is not excited about the wedding because Gail will be staring daggers into his eyes all night.

Nick and Andy stop by a passenger bus filled with seniors that is stopped by the side of the road. Some of the people are hurt; the bus driver stopped the vehicle, pulled out a gun and robbed them all. Sam is on the scene and Andy says it figures, the one night they have somewhere to go (meaning the wedding) and they have to interview a bunch of seniors.

Oliver got himself a date for the wedding. Nick brings the seniors into the station, Frank calls Sam and his best man is MIA, so he begs Sam to fill in for him. Andy is interviewing one of the senior couples and the woman claims the robbers voice was strange, almost like he was faking it. Dov is interviewing a senior named Archie and the woman who hired the bus comes in, but it turns out that the robber arrived with a different bus.

Andy is worried that she won’t make the wedding because it is in four hours, Oliver tells her to get cracking because this case is going to be solved before anyone goes to a wedding.

The lady who who hired the bus is acting kind of guilty, at least Chloe thinks so.

Trouble in paradise, Nash calls Sam and tells him that Noelle is missing. Back at the station, there is one couple that is married but not wearing wedding rings. Nick takes the husband aside and he asks him if he wants to tell him anything, the man looks at him and says that he better have a better reason than he and his wife getting their rings cleaned to detain him.

Nash finds Noelle, she tells her that she is not getting married. Noelle confides in Nash that she has a lump, her mother and sister both died of breast cancer and she is terrified. The biopsy reports have not come back, but Noelle can’t make Frank marry her because he pities her.

Andy and Nick interview the man that sold his and his wife’s wedding rings, it turns out that he is in some terrible financial trouble. He tells them that his wife needs treatment that he can’t pay for and that is the tricky thing in life that you can’t plan for. He tells them the truth that he was in on it with this other guy named Jamie.

One of the seniors tells Gail that she is too cynical for her age and life is too long to go it alone.

Nick and Andy go to visit Jamie at work but he is high on a building working and they have to wait for him to come down.

Oliver has arrived at the wedding with his guest, Celery. He walks in and sees Zoe who tells him that she broke up with her boyfriend.

Gail arrives at the wedding as well, Dov and Chloe are already there. Frank walks in and Dov blurts out that he is dating Chloe, Nash rushes in and tells Frank that Noelle needs to speak to him.

Frank is outside talking to Noelle, he tells her that together they will get through it and this is no reason not to get married.

The wedding starts, Noelle looks beautiful, Andy and Nick are listening to the ceremony over the radio. Andy says to Nick that the words get more magical every time she hears them and then Andy tells her that is how he feels about her. All of a sudden, the foreman knocks on the door of the squad car and they see Jamie coming down, when they call him, he goes back up.

Andy tells Nick that it’s crazy, meaning them, he says it is up to her. At the wedding, Olver’s date tries to leave and he encourages her not to. Holly is in a room with Gail and kisses her, Gail is so surprised and Holly just gets up and leaves. Nick and Andy finally make it to the wedding, Sam eyes the two of them and you can just see that he wishes he was still with Andy.