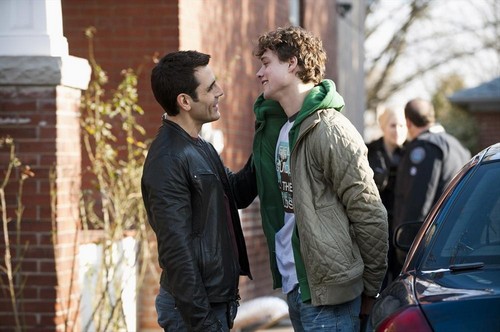 Tonight on ABC ROOKIE BLUE continues with a new episode called, “You Are Here.” On tonight’s show Traci’s first homicide case forces her to go head to head with Steve Peck, and a weekend of male bonding at Oliver’s cabin gets off to a bumpy start. Did you watch last week’s season premiere, we did and we recapped it here for you!

On last week’s show Chris’ reunion with his rookie family took a shocking turn when his son, Christian, was kidnapped while in Andy and Nick’s care. As the squad spread out to search for the boy, Swarek was confronted with Andy and Nick’s budding relationship.  As our officers discovered clues to the identity of Christian’s abductor, Chris was slapped with a stunning revelation that might tear his new family apart.

On tonight’s show a routine bust of a marijuana grow-op develops into Traci’s first homicide case, and Andy, Nick and Gail are forced to work overtime to investigate the unusual murder case. Meanwhile Swarek, Oliver, Chris and Dov are off for a weekend of male bonding and generator repair at Oliver’s new cabin. Both Andy and Sam both have something to confess, but is it too little too late for both of them?

Gail and Oliver are out on a patrol when they had to break up a domestic dispute. As they were leaving the scene though they smelled something coming from the boarded up house next door.  The probable cause leads them to busting up a farm. A marijuana farm.

They also managed to catch a suspect as he was leaving from the back door. The guy is claiming he was only there to buy but he’s wrong place wrong time act only served to anger an already frustrated Sam. Luckily Oliver pulled Sam away.

Sam’s frustration may be from the Andy/Nick. Even though those two are playing it coy they’re a little bit too obvious in ignoring each other. Oliver later goes to him and tries to get his friend to relax. He invites him to a cabin to unwind.

Another source of good new has come. Chris is back. He dumped his false baby mama and now he’s back to where he started. Dov tries to cheer up but how can he fully what with Chris having a family one week and losing it in the next. However once the boys here about Oliver’s cabin Dov decides it would best to go. He could help get Chris out of his funk.

The guys slip out just in time.  A lot of people are out due to illness so backup has been called. For instance Andy and Gail have to pick up all of the plants at the pop-up farm and Traci has to work the case solo. She thought it would be easy yet she was wrong. Apparently turning down Gail’s brother, Steve, wasn’t going be the biggest decision for the day. She now has to deal with a body that was found at the farm.

The stoner from earlier, Chuck, now has to answer a lot more questions. Traci attempts to question him but he knows how talk around subjects forever before actually getting to a point. His lack of focus doesn’t help Traci at all. She does get a name; Ivan. Traci has to return to the scene and she ends up taking Chloe along for the ride. Nick suggested it when Chloe talked about no one taking her seriously. Well here’s a chance to prove herself.

They arrive back on the scene to find Steve’s unit pushing in on their case. Steve explains he would have warned her if she ever returned any of his calls. Burn!

Andy has been skating around telling Gail the truth. She almost confessed to the truth when Gail had an accident at the farm. She takes her to the hospital. There she thinks she could finally admit to sleeping Nick only to be deterred yet again. Gail’s pain medication has made her high as a kite.

Meanwhile the boys’ camping trip is really horrible. Dov and Chris are still treated as rookies doing the grunt work much to their frustration and Sam keeps moping. Unbeknownst to Sam and Oliver, Dov and Chris got lost in the woods tried to find wood to burn. Back at the cabin, Sam worked himself up to saying what troubles him. He’s getting older and he thought he would have been settled by now. A wife and kids. Basically , the whole package.

Maybe Chloe has been greatly underestimated. They bring in a suspect who only speaks Portuguese. Chloe speaks Portuguese and in the middle of interrogating him she notices that he has stronger grasp on English than they thought. Testing him she got the suspect to reveal he knows English fluently.  Their suspect is innocent but he does know who killed him at least by phone number.

Chuck, the stone head, fixed the previously botched contract kill. He killed his partner Ivan when he refused to expand their pot business. Once he knows he’s caught he drops his stoner persona.

Dov and Chris make it back to the cabin and they subtly demand some respect for being more than rookies by now. In return they fix the electricity and the TV.

Andy did get to tell Gail the truth when Gail admitted she caught on a while ago. She’s been playing with Andy ever since. Andy wanted to know if she could get her blessing but that’s never going to happen. You don’t date a friend’s ex. The fact Andy broke those rules means she lost a friend. Nonetheless the moment Andy saw Nick later she kissed him and proved to herself that he was worth it.