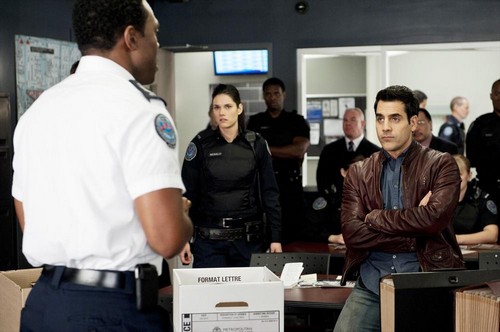 Tonight on ABC ROOKIE BLUE continues with a new episode called, “You Can See the Stars.” On tonight’s show a shooter’s devious strategy plays out according to plan, placing more of the squad in his crosshairs and putting the future of 15 division in jeopardy.  Did you watch last week’s season premiere, we did and we recapped it here for you!

On last week’s show Andy and Chloe were blindsided by an unseen shooter when they respond to a routine 911 call. When more shots are fired at a subsequent emergency call, the officers realized that 15 Division was being targeted by someone out for revenge. The clock was ticking as the squad tried to serve and protect, while running down suspects. Meanwhile, Oliver came face to face with the shooter in a gut-wrenching, life-changing moment.

On tonight’s show In the wake of violent targeted attacks on 15 Division, Andy, Swarek and their fellow officers begin to piece together a past crime in order to find out what has happened to Oliver Shaw. While the squad is desperately trying to find Oliver, Dov and Wes face off about what’s best for Chloe. And as the shooter’s plan is finally revealed, it may be too late for some of the officers of 15.

Tonight’s episode is going to be an exciting one that you won’t want to miss, so be sure to tune in for our live coverage ABC’s Rookie Blue tonight at 10 PM EST! While you wait for our recap hit the comments and let us know how excited you are about the new season of Rookie Blue! While you wait for the recap, you can checkout a sneak peek video of tonight’s episode tonight below.

RECAP: The finale starts off with Oliver stuck in a trunk.

Everyone is sent out on patrol to find Kevin. Andy tells Sam that he is going to have to explain this to her, he says that there is nothing to explain. Holly tries to speak to Gail, but Gail doesn’t want to speak to her, Holly tells her to be careful.

Andy is looking for Oliver, tells Sam that nobody can reach him; they start to worry.

Andy goes out to find his car, they find his radio box, the car is missing.

Traci discovers a note that was Kevins that has a lot of the officer’s names on it, almost like a hit list.

Sam and Andy are with Frank and he tells them when they leave there they are going to the station because Kevin had a hit list and they were on, he wants them safe.

Luke is upset at Marlow for taking a lot of material out of the station, Andy tells him that she is doing better and reveals that she is bipolar.

Chloe is in the hospital, the doctor thinks that they should do surgery because she could go into cardiac arrest. Dov is there and he is really concerned about her.

Andy is back into the station, Izzy is there and she tries to assure her that Oliver is going to be ok.

Luke and Tracy have Kevin’s brother in the station and he swears he hasn’t seen him in some time, he actually cut him off and thought Kevin was going to kill him.

Oliver is tied up now in some sort of building, he asks Kevin what he is doing, he says he is setting the trap. Kevin says the bitch has it out for him and so does he. Kevin says that he got Chloe and now it is time to get Oliver. Oliver tells him that Chloe is not dead, he in fact did not get her.

Sam and Andy are trying to find a clue to where Oliver is, they are working together in the station.They find a clue, some parking tickets that give them a location of a church. Traci and Luke go back to see Kevin’s brother and he tells them the church is a place they have been before, then he tells them a story about their father being abusive to them in the church.

Oliver asks Kevin again what he is doing, Kevin says that soon everyone will know what it is like to suffer, then he tells Oliver that his father use to bring him there and make him suffer, night after night. Kevin starts screaming that he never touched the kid, he would never do something that makes him sick. Kevin uses Oliver’s phone, dials 911, then hangups up when they answer and tells Oliver they are coming for him.

Assault teams are getting ready to go to the church and Frank tells them that everyone comes back safe, no discussion. Steve doesn’t want Traci to go, she tells him that it is going to be fine.

Oliver is still by himself and telling Kevin that it is still not too late, he can still put a stop to this. Oliver keeps talking, but he has found something for a weapon. All of a sudden a robotic camera flies though the window and the team outside know that Oliver is alive.

The police are moving in and Oliver screams at them to get out because there is a gun. They get to Oliver and he is upset, he says that Oliver was right there and he was sure that he was going to start shooting.

Dov wants Chloe to have the operation but her husband doesn’t want her to have it and tells Dov that it is his choice, not Dov’s choice.

Marlowe finds out that Oliver is fine, but Kevin is gone. Marlow goes over more of her material and thinks that maybe this whole time she was looking over the wrong brother.

Sam is leaving the station, he tells Andy that she should stay where she is safe. Andy tries to stop him, he says he can’t be there anymore with her. Sam tells her that he screwed up over and over again, he just wants her to be happy and that means that he has to go. Andy runs after him, outside Andy notices that Oliver’s squad car is in front of the station. Sam calls Frank, tells him that Oliver’s car is there and he thinks Kevin is in the building. Sam goes back in and alerts everyone that Kevin could be in the building and wearing a police uniform.

Sam starts putting people in lock down and tells them that they are in danger to stay in one of the rooms and not to come out. Kevin is in fact in the building and he is planning something. All of a sudden, Kevin shoots Sam; Andy runs to him and tells him to stay down’ Kevin is shot and also hits the ground.

Luke interviews Kevin’s brother who says to him that it is all over now, why do they still need to ask him questions.

Meanwhile, Dov wants to go in to see Chloe and the doctor tells him that her husband has made his wishes clear and he cannot go in there.

Andy goes into the room and all of a sudden it appears that a lot of the machines start beeping, then that is it, season is over and we have to wait till next season to find out if Chloe and Sam make it through.