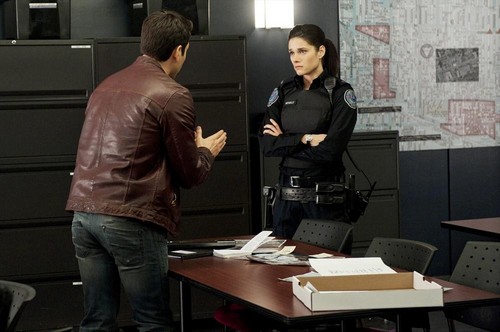 Tonight on ABC ROOKIE BLUE continues with a new episode called, “Under Fire.” On tonight’s show a shooter determines it’s payback time, launching a devastating attack on 15 division.  Did you watch last week’s season premiere, we did and we recapped it here for you!

On last week’s show when a suspected pedophile was found severely beaten, Andy discovered that Marlo had been carrying out an all-out, unauthorized investigation into the man. Andy and Swarek had to scramble to cover for Marlo’s unprofessional conduct before she was exposed. Meanwhile, Traci oversaw a major drug sweep, assisted by Chloe, Nick, Dov and Gail, but when Sam left his post to help Marlo, the operation took an unexpected turn.

On tonight’s show Andy and Chloe are blindsided by an unseen shooter when they respond to a routine 911 call. When more shots are fired at a subsequent emergency call, the officers realize that 15 Division is being targeted by someone out for revenge. The clock is ticking as the squad tries to serve and protect, while running down suspects. Meanwhile, Oliver comes face to face with the shooter in a gut-wrenching, life-changing moment.

Andy had an eye opening experience last week. After she had fudged some documents for Sam and Cruz, she realized she became sidetracked from what she really what to do with her career. She didn’t want to be that cop that covered things up. She wanted to be the person that fought injustice. That’s why she’s turning over a new leaf.

Nick does understand it but as long as her focus doesn’t cut him out then he’ll be fine. Andy doesn’t want any distraction from now on.

Chloe and Andy were on patrol together when dispatch informs them of an unconscious man. They go to investigate it but they only find a dummy. Some a crafted a very realistic dummy. Chloe was just admiring when they heard the gunshots. Andy wanted to get Chloe reaction but when she turned around she found Chloe holding her hand up to a gunshot wound on her neck.

Gunshots are raining down on them as the back-up takes forever to show up. Oliver and Gail help Andy with Chloe while Chris and Nick go to the rooftop. The gunmen had already fled the scene by time they arrived. However Chloe’s doctors did say the gunshot could have been more fatal. With her condition though the bullet came too close to tell if her spinal cord has been compromised.

Dov was anxiously waiting for more news when a cop from Chloe’s former division came in making a fuss. The guy apparently was still on Chloe’s emergency contact list. Dov’s surprised to find he’s talking to Chloe’s husband.

Gail and Oliver were still out on patrol when dispatch lead them to a back alleyway. Oliver had stuck his head in to talk to Gail for one second. That one second saved his life. It was another ambush. Someone is targeting the squad.

Andy’s jacket was grazed with a bullet and that means she’s off of duty. No matter how many times she tries to tell everyone she’s fine. She makes Nick promise he’s going to be careful. He has girlfriend worried about him. Someone else who has a worried girlfriend is Gail. Her new friend finally made a move and the two shared a kiss. Not sure where it leads but at least Gail has someone worried about her too.
Her brother is too caught up in Traci. Steve wants things to progress with the girl he’s been dating for the last couple of weeks. In other words he wants to meet her son. After he assures he’s sticking around she agrees to a meeting. Only when these shootings are all over.

One relationship that’s moving full steam ahead is Oliver and Celery. He keeps going over and over in his head and to Gail if it was a good idea that Celery moved in. His ex-wife moved in early in the relationship as well. Luckily another call from dispatch shuts him up.

Gail is worried about the newest emergency. She wants Oliver to wait for back-up but he gets her to follow him into the apartment building. An elderly man had a heart attack and the only person with his was his granddaughter that happens to be deaf. Gail’s fears almost allowed them to let an innocent man die.

They have suspect. Kevin Ford the same guy Cruz was stalking. He went over to Oliver’s house and had run into Celery. She tried to confront him and he grabbed her. Fortunately she’s safe but her id on the guy helped Andy identify him. She and Sam go over to Crus’s sister’s house while she sent Nick to Cruz’s place. Sam didn’t know beforehand that she told Nick everything.

Nick finds the house torn apart. Cruz isn’t at her house anymore. She’s taking time off and went to stay with her sister but she left her contact information on the fridge for her neighbor that will be watching the house. Nick has to call it in but to do so means Cruz’s secrets, everything from her disorder to the way she obsessed over Ford.

Cruz turns out to be fine. It was Oliver who was making his way into her place to join Nick that was in danger. Ford accuses him of setting him up right before he knows him out and kidnaps him. Will Oliver make it?