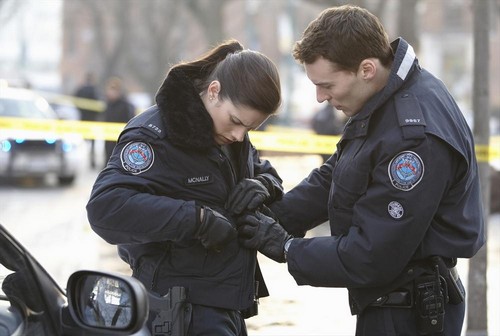 Tonight on ABC ROOKIE BLUE continues with a new episode called, “Deception.” On tonight’s show when Marlo decides to pursue a suspected pedophile on her own, Swarek pressure Andy to cover for Marlo’s offside behaviour. Did you watch last week’s season premiere, we did and we recapped it here for you!

On last week’s show a routine bust of a marijuana grow-op developed into Traci’s first homicide case, and Andy, Nick and Gail were forced to work overtime to investigate the unusual murder case. Meanwhile Swarek, Oliver, Chris and Dov were off for a weekend of male bonding and generator repair at Oliver’s new cabin. Both Andy and Sam both had something to confess, but was it too little too late for both of them?

On tonight’s show when a suspected pedophile is found severely beaten, Andy discovers that Marlo has been carrying out an all-out, unauthorized investigation into the man. Andy and Swarek must scramble to cover for Marlo’s unprofessional conduct before she is exposed. Meanwhile, Traci oversees a major drug sweep, assisted by Chloe, Nick, Dov and Gail, but when Sam leaves his post to help Marlo, the operation takes an unexpected turn.

The show begins with Marlo outside of pedophile Kevin Ford’s house watching his every move. She gets out of her car and goes to check out his house. She looks in a window and sees a room with kids toys. He catches her and recognizes her as a cop. He tells her it is harassment and to get off his property. Before she leaves she tells him this is not over. He agrees and lets her know he is calling her supervisor.

Andy wakes up Nick for heir shift. They talk about their night out the previous evening. He watches her lovingly as she gets ready. He tells her they need to be open with each other and figure things out as they go along.

Dave and Gail are reeling from a three-night assignment they were on. Chris is jealous because he is still on desk duty. Chris is doing his best to cover how he feels about losing Christian. He talks a lot about living for himself. The three of them make plans to celebrate after shift.

At the precinct Frank tells the cops that it is the last night of the special operation going on, Drift Net. It is all about cleaning up the streets. Tracy informs the group where the operation is going to be set up, so all patrol cars are to steer clear of that area. Oliver asks Sam where Marlo is when she doesn’t show up for parade. Andy finds Marlo in her car with records on Kevin Ford having trees taking down in his back yard. She is convinced he still had something to do with the missing Hartley boy. As she goes on about how he had trees taken down to watch an elementary school Andy becomes worried about her. Marlo lets it slip that she was over watching Kevin late the night before.

Tracy and Sam get underway in operation Drift Net. Nick and Chloe are in a car helping with the sting. She grills him about shaving thinking it means he is in a new relationship. She thinks it is Andy but Nick won’t give up any details to her.

Oliver and Andy are riding together and he ribs her about being so happy. She is just tells him she is happy but he still keeps giving her crap. They get a call about a man being beaten at his house. It is the house of Kevin Ford who has been badly beaten.

The man Tracy, Sam and company are watching is on the move, a drug move. They monitor his action and are looking to bust the man as well as all his buyers. Dove and Chloe but the first buyer who has crack cocaine on him. The guy of course tries o deny it, blaming it on kidney stones. They let Tracy know the man is in custody.

Luke is the detective on the Kevin Ford beating case. He and Oliver walk through the crime scene. Andy and Oliver canvas the street for witnesses. A neighbor tells Andy there was a woman and Mr. Ford arguing in the yard the night before. She describes a woman fitting Marlo’s description. Andy makes an excuse to leave Oliver and calls Sam about her suspicions that Marlo is in trouble. She asks him to meet her at the station. Sam leaves Tracy alone to run the operation.

Back at 15 Chris is on desk duty. Andy tells Sam about Marlo being at Ford’s house. The two find Marlo in the evidence room with a slew of information involving Ford and the Hartley case. She is talking really fast and is worked up. When Marlo walks away Sam asks Andy what is going on and she reveals that Marlo is bipolar. She fills him in on how she found out. Marlo comes back with more information. Sam tries to calm her down but she won’t listen to him and continues to get worked up. Sam tells her what happened to Ford. When she is questioned about doing it Marlo relays what went down the night before to Sam and Andy. As Sam asks her if there is any evidence that could link her to being at Ford’s house Marlo begins to break down. Sam orders Andy to sign Marlo out and take her home without anyone seeing her.

On the drive to Marlo’s house she realizes Andy told Sam. Andy questions what happened and Marlo tells her she fell in love. She just wanted to feel like other people did when being in love. Then she asks Andy to take her to her psychiatrist.

Tracy running the operations recognizes one of the buyers as someone from the Downing crew. Nick and Chloe wonder why he is buying drugs from the competition and keep the suspect in sight. Nick asks for Tracy’s advice on whether to apprehend him or not. Tracy hesitates but ends up telling Nick and Chloe to just watch the suspect, who is just sitting in a car. They are ordered to watch unless the car moves.

Sam heads to the Kevin Ford crime scene. He sees CSI dusting for prints on the window and door that Marlo touched. He ignores a call from Tracy who is seeking his advice on what to do about drug suspect. Luke catches Sam looking around. He tells him he is familiar with the case. Luke lets Sam know he has everything under control.

Marlo tells Andy she was just trying to do the right thing and she knows she crossed the line. It slips out that Marlo went inside Kevin’s house.

Sam learns that inside the house partial prints were discovered but nothing usable. He gets a call from Andy telling him that Marlo was inside the house and looked at his computer. As a tech is getting prints off the computer she tells Sam thee were two sets of prints that have been sent to the lab. Sam continues to look around the house. He calls Andy to tell her that the cops have Marlo’s prints and Andy needs to go back to the station and make an entry in Marlo’s memo book explaining why she was there. Andy doesn’t want to they two argue as Sam assures Andy Marlo didn’t beat up Kevin. He doesn’t want the case to become about Marlo’s bipolar. Andy reluctantly agrees after Sam pleads that this mistake could ruin Marlo and she needs to be a cop.

Tracy calls in Gail’s brother for help when she can’t reach Sam. She makes it clear it is all about work. Chloe interrupts them to tell that another vehicle is approaching, with Jackson Irving head of the Dowing crew in it. Irving hands off a package that Tracy and Detective Peck believe are untraceable guns. The second car leaves and Tracy and Peck realize the first buyer was fake to scope out the completion. It is turning into a war. Tracy wants to move in but Peck wants her to wait to they can take down all the soldiers and Irving. The two argue as Tracy tells him the operation is not set up to handle that kind of take-down. Peck tells her he can have backup there in minutes but it is chance for her to take a murderer off the streets. She gives in and tells him to make the call.

Andy gets the code to the memo books out of Frank’s office, thanks to Sam’s direction. She grabs Marlo’s book. Luke and Frank talk about the Ford case as Andy rushes to entry. Luke is informed the prints are Marlo’s. Frank tells him officers were there a couple of weeks ago but Luke lets him know the report does not list her as being on scene then. Andy is able to get a note in the memo book before Frank makes his way to show Luke the memo book. He shows Luke the book and Luke decides not to talk to her but does ask for a copy of the entry for his report. Andy calls Sam to tell him it was done but is pissed she was put in that situation.

Oliver is canvasing the houses of Ford’s neighbors when he comes across a bouse with a young boy and a father with a hand that is bandaged.

At the station Sam talks to Tracy but all she wants to know is if the reason he left was important and she said it was. Tracy glances at Detective Peck as if she is starting to fall for him.

Oliver arrests the neighbor who attacked Kevin Ford. He is pissed at Andy when she shows up at the scene after making him canvas the neighborhood by herself all day. It turns out Ford approached the man’s son when the kid told his dad about it Ford and the dad got into and Ford fell hitting his head. Luke makes it clear to Sam that no one would have been suspicious if an officer had not gone door to door asking about Ford a week before. He tells Sam it was a female but Sam doesn’t say anything. Luke drops it.

Andy keeps her day from Nick. She wants to go home with him but he decides to go home by himself. Gail and Dove get ready to party with Diaz even though they are not in the mood. Chris hides that he is still talking to Denise about Christian, who is having trouble. He admits to her that he misses Christian a lot.

Sam tries to convince Andy she did a good thing that day. She is made at him and tells him that she doesn’t want to follow his rules anymore. She wants to be straight