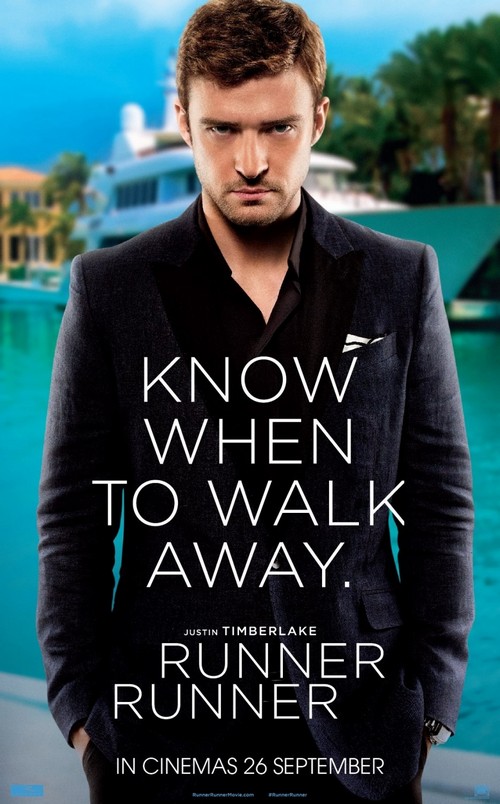 So the previews for Runner Runner did absolutely nothing to make me want to see this film – literally, nothing. Apart from Gemma Arterton – who’s a fantastic screen presence but usually makes shitty film choices – the cast screamed of stunt casting, and the film looked like the typical by the numbers gambling thriller.

And let’s be real here – Justin Timberlake is a great musician, but he’s a terrible actor. And Ben Affleck is a terrific director and filmmaker, but his ability to hold the film really depends on the script and story. Which for Runner Runner, was not very good.

The highest praise I can give this movie is that it was serviceable entertainment. It wasn’t terrible, but it was increasingly predictable and formulaic, and I could guess every twist and plot point in the movie was predictable. There was no real suspense generated, and Timberlake, as usual, as as bland as a paper towel. But at the same time, it wasn’t the worst movie I’ve ever seen.

It makes me sad that Gemma Arterton is involved in films like this, and it’s actually sad that Ben Affleck was involved in this as well. He’s coming off the highly acclaimed Argo, which won Best Picture at last year’s Oscars. He’s about to star in David Fincher‘s next movie and he’s going be the next Batman. Runner Runner is his in-between film? I suppose everyone has their shot to do one shitty film in between everything else, but he used up all of his grace points with Gigli. I don’t care if that was like a decade ago, it sucked that badly.

Anyway, if you want to spend your hard-earned money on a movie that will do the bare minimum to keep you entertained, then by all means – go watch Runner Runner. But for everyone else, I suggest going to Gravity or waiting until Captain Phillips or Twelve Years a Slave releases in theaters.