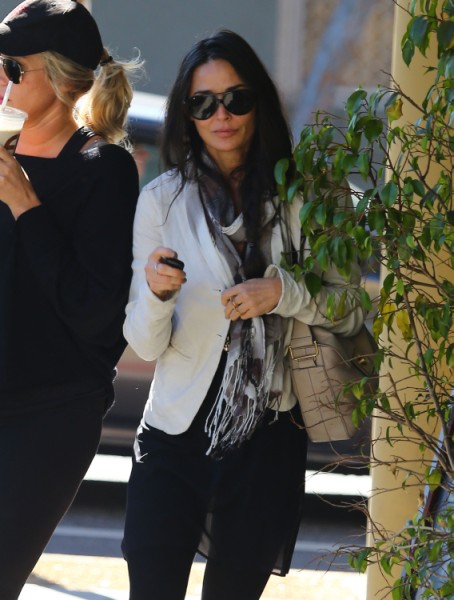 Damn it! I was really excited about this. I know… I was too excited. I had already planned their adoption schedule and possible movie collaborations. I knew it was a long shot but it just looked SO good on paper. Apparently though, Russell Brand didn’t think so.

In an interview with The Sun, Russell discussed his new charity event and all his new yoga friends – Demi Moore being one of them. For the most part he was sweet. He said she was just a friend, a very beautiful, very flexible, very old kind of friend.

“I had all the crew on my TV show doing yoga in the studio the other day too. There were 100 people doing it. It’s not your normal yoga. It’s like proper chanting, full-on stuff — not for the faint-hearted. It’s full of amazing women. That’s a fact. They are all filled with sexual energy. It has been brilliant. Demi Moore, as far as anything more physical goes — she’s just at yoga. I really like her, she’s really lovely. I just see her at yoga. She’s an older lady, she’s incredibly beautiful but that’s that.”

He goes on to freak out about yoga a little while long but who cares about that because Jesus Christ man! Ouch! What the shit was that all about? Um… thanks for telling a major publication I’m pretty but did you have to throw in the old part?

I’m sure Russell was kidding and said it in his adorable little accent but, still, way to kick a chick when she’s down. Everyone in the world knows age is Demi Moore’s Achilles heel but there’s no need to shout it from the rooftops. Maybe I’m just being bitter. Demi has had her issues but she’s still a few steep steps up from Katy Perry in my eyes. Perhaps Demi didn’t want him? Maybe. I can go there but it doesn’t assuage the heart any more.

Whatever, you can have your yoga, Russell Brand! I’ll keep looking for another suitable choice for my Demi.

But should he have filtered himself a little better when he referred to the 50-year-old actress as an “older lady”? Demi Moore’s 50 but you’d hardly consider that old, right? Do you think he could just be trying to get the press off their tracks? Could a Russell Brand/Demi Moore relationship still be very much on? See? I can’t let it go. I just can’t let go of the dream. It was too damn perfect.