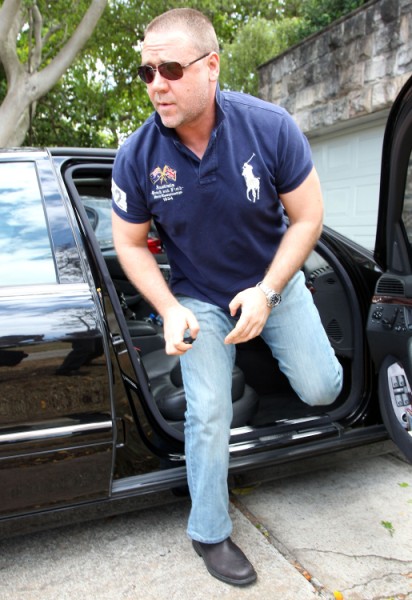 So… that reconciliation between Russell Crowe and his wife of nine years Danielle Spencer must not have went very well because apparently Russell is moving on to Marilyn Manson’s sloppy seconds. I didn’t mean that to be too derogatory. Anything that touches Manson is by definition tarnished (sorry Evan Rachel Wood!) but a man can do much worse than Dita Von Teese.

According to Page Six, Russell and the burlesque dancer spent some quality time together during the holidays. They got couple’s massage together at the Four Seasons Hotel in December and have been uber flirty via twitter. Russell and his wife sorta split in October but it was weird. People thought Danielle was stepping out in Australia because some suspicious pics emerged of her and another dude. Since Russell’s never there who could blame her? He rushed back to be with his family when the shit hit the fan and we were all told they were working it out. Perhaps they were just working out the divorce settlement because Danielle’s going to be set up nicely when this is all done.

So on to Dita. At first I thought this was an odd pair on his end but no so much on hers. She obviously likes bad boys with unusual reputations. Russell fits her mold. But Russell tends to date sweet blonds. There was the Meg Ryan debacle and Danielle is a cute as they come. It’s like Russell is turned on by the dangerous chicks but settles with the ones you can only bring home to mom. Maybe he’s ready to scrap that idea. I hope he does. Can you imagine Dita Von Teese on red carpets? She would shut it down every time! I’m a big fan on this relationship. Please Russell don’t screw it up!

Are you cool with the Russel Crowe, Dita Von Teese hook up? After some thought do they make some sort of weird sense?