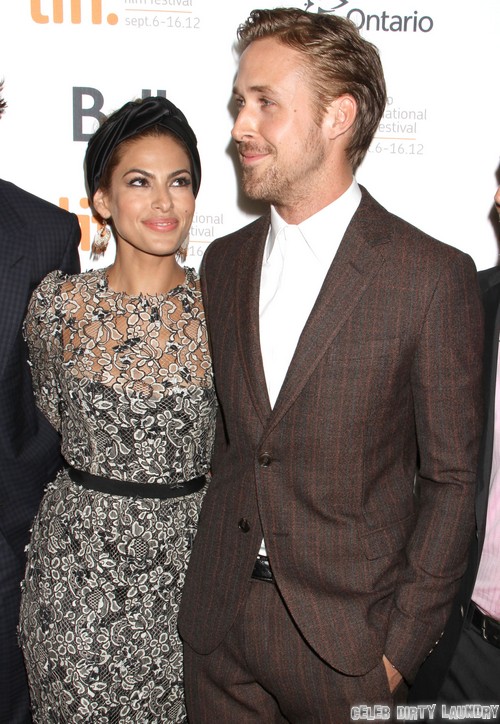 I think the last time we talked about Eva Mendes and Ryan Gosling it was because he was having issues with her nudity. Apparently Eva really hates to have to keep her clothes on and usually walks around stark naked at home. At first Ryan thought it was awesome, until he realized that he can’t bring friends home because even if he gives Eva a heads up she still doesn’t want to cover up!

Ryan may have been frustrated a month ago but now he seems to love the way that Eva gets him all worked up. Ryan has been working on location in Detroit and according to the May 27th print edition of STAR magazine, Eva has been causing quite a stir when she visits the set.

“While Ryan is busy working on his new movies How To Catch a Monster, the two have been using the editing suite to steam things up. They aren’t exactly discreet,” spills the source. “Ryan will be totally focused, then she’ll throw him off by giving him a saucy look. The next thing you know, they’ve kicked everyone out of the room so they can ‘talk’.”

Well, if the woman doesn’t care who sees her naked at home then I’m pretty sure that she won’t care if it’s obvious to everyone on set that she’s on a mission to bang her boyfriend! I’m sure Ryan loves the fact that he has scored such a sexual chick. The two have even hooked up in the director’s booth and god knows where else they’ve gone to “talk”.

It’s obvious this couple has some major physical chemistry, but I can’t help but wonder what else there is that keeps them together. Eventually you have to be able to carry on a conversation too! Do you think they are compatible on other levels or will this burn out quickly? Tell us your thoughts in the comments below!