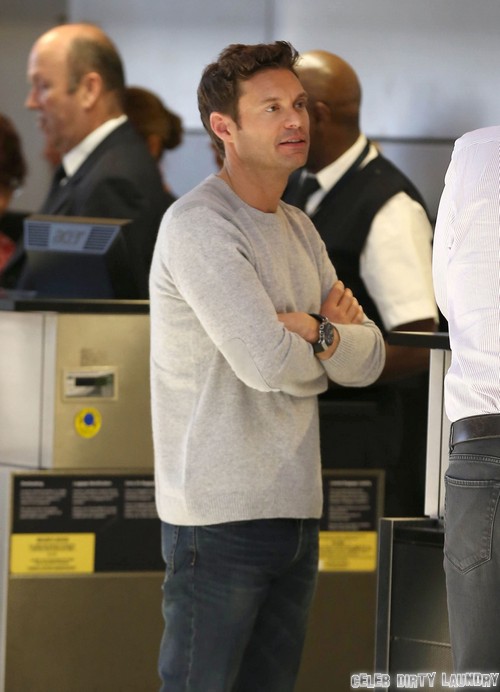 Ryan Seacrest’s team has to do damage control now that he’s no longer with Julianne Hough. They don’t want us to remember that everyone thinks he’s gay, so they’re now trying to have him hook up with some models and Playboy playmates – you know, because that’s what straight men do.

A source tells Radar Online that during an ‘uncharacteristically’ wild night, Ryan was ‘attached at the hip’ with three young models, including a Playboy playmate. The source explains that Ryan and the girls spent the entire night at the DJ booth, adding, “He asked if he could go up there and stayed for like 30 minutes with the girl in the booth. Then they brought out a couple bottles of champagne and he was spraying the crowd. The crowd was going crazy and Ryan was loving it. He didn’t even want to get off!”

Uh huh. Nice try. I mean, sure he could have been at the party and seen with three models. I’m sure the models were all up in his face, but does anyone really think that there was anything even remotely sexual going on between any of them? The interaction probably consisted of them throwing themselves all over him, and him barely noticing. That, I would believe.

Let us know what you think about Ryan Seacrest and his trio of models. Do you think his team is trying to get us to think that he’s over Julianne Hough? Or are they just trying to prepare us for his next ‘girlfriend’? I mean, Ryan and Julianne were together for a long time, and he does have some standards to maintain. I just don’t think that a Playboy playmate fits his image, and I can’t imagine how the public would react to that. What about a Playgirl centerfold? Let us know what you think in the comments.