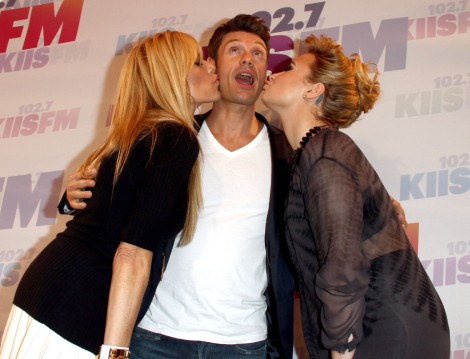 Smart move brother. Get off that sinking ship as fast as you can!

After Randy Jackson shocked fans by finally announcing he’s leaving American Idol, Ryan Seacrest is creating some buzz of his own. The man and his golden tips have hosted for all 12 seasons and his departure would be another major blow to the show that can’t seem to find its footing lately. Even the revolving door of celebrity judges hasn’t been able to breathe life into the show. Whoever thought Mariah Carey, Nicki Minaj and Keith Urban would be any different this year were clearly mistaken. But even with the ever changing judges, Seacrest (and Jackson) were the much needed anchors holding the show and it’s die-hard fans in place. Without those two it’s a sure sign the show is dead where it stands and needs a massive overhaul.

But I could be jumping the gun. Seacrest hasn’t said he’s leaving for sure just yet. He told Entertainment Tonight: “I don’t want to say yes and then get a call tomorrow. As far as I know, yes. I’m coming. I’m showing up. Hopefully, they’ll let me in.”

Money will definitely be an issue. Ryan strikes me as a pragmatist who’ll stay if he’s paid well enough. But I’m sure this shit is getting old. That’s the problem with Idol. It’s just OLD. Other copy cat shows came to play but Idol won’t change to compete. It’s making the drama all about the judges when the entertainment needs to come from the singing. Who the hell cares what Nicki Minaj has to say anyway?

Maybe Ryan is playing hardball to light a fire under the producers’ asses? He’s got some power there. Will any of you watch if Ryan leaves?