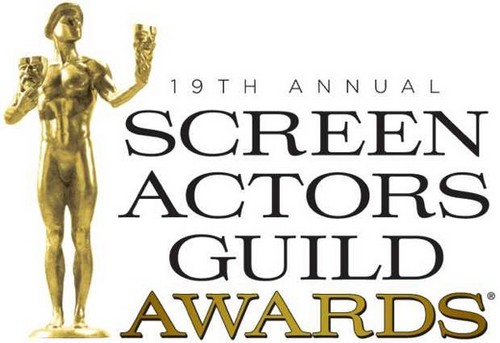 Let me start by saying of all the shows in awards season, I find the Screen Actor Guild Awards (SAG) the most pretentious and self-serving. Especially the opening scene where the featured stars tell their story and then announce, “I am an actor…” Reminds me of that classic “Acting… genius… thank you” SNL skit with Jon Lovitz. That being said, I wouldn’t miss it for the world!

Jane Krakowski, Chris Tucker, Helen Hunt, Hal Holbrook, Alfre Woodard, Darren Criss and Sofia Vergara did the openers and they were actually funny this year rather than stuck up. Promising start!

Nicole Kidman is the first presenter and is handing out best supporting actor. Alan Arkin (Argo), Javier Bardem (Skyfall), Robert DeNiro (Silver Linings Playbook), Philip Seymour Hoffman (The Master) and Tommy Lee Jones (Lincoln). Does it seem to anyone else that Jones channeled Two Face in that movie. And yet he won! But he wasn’t there. Well, he wasn’t smiling at any of the other shows so you can tell he doesn’t enjoy these.

Jennifer Lawrence and Bradley Cooper introduce their movie Silver Linings Playbook. Cooper looks dapper as usual and while Lawrence looks beautiful, her black sheath is too, too plain.

Justin Timberlake is presenting next (why?) in a suit that looks like Chris Colfer loaned it out of his Glee wardrobe. He’s doing best supporting actress. Sally Field (Lincoln), Anne Hathaway (Les Mis), Helen Hunt (The Sessions), Nicole Kidman (The Paperboy) and Maggie Smith (Best… Marigold Hotel). The winner is Anne Hathaway (naturlich). Please God let her speech be less annoying than the Globes. Her dress looks vintage, but if you made it see through. Unflattering – perhaps she’s pregnant – if not, just ick. She thanks her folks, her reps, her manager, casts from both Batman and Les Mis. She finally mentions her hubby. Very blah speech. Very blah dress. Blah… blah… blah… 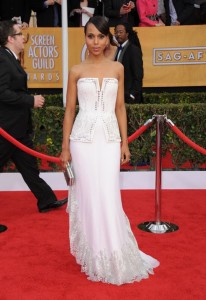 Jeff Daniels and Kerry Washington are the next presenters. She looks like she left her futuristic wedding to come and present. The front is very Logan’s Run and the back is like a doily exploded. Not loving it at all. Best actor in a comedy series is the award they’re giving. Alec Baldwin (30 Rock), Ty Burrell (Modern Family), Louis C.K. (Louis), Jim Parson (Big Bang Theory) – love him – and Eric Stonestreet (Modern Family).

The winner is… Alec Baldwin. What the f- is with his hair? It looks like he used brown die on just the top of his head. Is this the work of his new, much younger wife? He thanks Tina Fey and the other writers (classy), thanks the new wife and his agent. It looks like he’s in a bad rug. 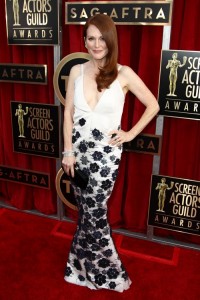 Julianne Moore and Damian Lewis are presenting now. She looks like she was dumped into a low cut flour sack with black cabbage roses on it. She looks fat and saggy. Good God – does she not own a mirror? What an awful dress. Best actress in a comedy. Edie Falco (Nurse Jackie), Tina Fey (30 Rock), Amy Poehler (Parks and Recreation), Sofia Vergara (Modern Family) and Betty White (Hot in Cleveland). The winner is… Tina Fey. Tina looks very classic Hollywood. Beautiful hair and an LBD made stylish with the addition of a cool metallic belt. 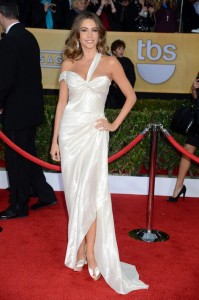 Sofia Vergara is a Grecian goddess in white – so sexy. Julie Bowen’s in shiny black with jeweled epaulets. Sarah Hyland looks gorgeous in feathery dark reddish-purple. Ed O’Neill had on a striking silver tie. All the kids looks so cute. Nolan Gould is in an adorable burgundy jacket. And Aubrey Anderson-Emmons is a vision in her tiny silver dress. The cast looks perfectly color coordinated in complementing colors. I can only assume that Jesse Tyler Ferguson styled them all. They were a perfect ensemble on stage as they are on Modern Family. Yeah! 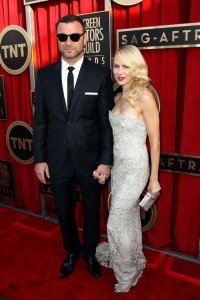 Naomi Watts and her handsome hubby Liev Schreiberare the next presenters. Her white dress is also very bridal looking. What is the deal with dresses this year? It’s pretty, but washes her out. Actress in TV movie or miniseries – Nicole Kidman (Hemingway & Gellhorn), Julianne Moore (Game Change), Charlotte Rampling (Restless), Sigourney Weaver (Political Animals) and Alfre Woodard (Steel Magnolias). The winner is… Julianne Moore. Oh God – not this dress again. It gets worse every time I see it. She looks like she’s dressed in the slipcover of an Ikea throw pillow. And her boobs are looking saggy in this gaping awful dress. Honestly, you may not like Sarah Palin (who she played in Game Change), but at least she knew how to dress.

Rose Burn and James Marsden are presenting next. At least she’s not in black and white. She’s in a peach monstrosity with angel wing sleeves that is both washed out and unshapely. The neckline is too high – it’s a mess all over. The only good thing on it is the belt. Actor in TV movie or miniseries – Kevin Costner (Hatfields & McCoys), Woody Harrelson (Game Change), Ed Harris (Game Change), Clive Owen (Hemingway & Gllhorn) and Bill Paxton (Hatfields & McCoys). The winner is… Kevin Costner. He didn’t show. Ah well.

Ken Howard and Roberta Reardon (the co-presidents) come out. Anyone remember him as The White Shadow? They came out to announce their union was uniting with some other union. Blah… blah… blah… Follow is a video salute to the actors’ labor union. Yawn. Can we get back to the self-serving trophy hand out please? I’m so glad to hear someone is watching out for the rich one percenters. Now let’s get back to watching them laud each other. 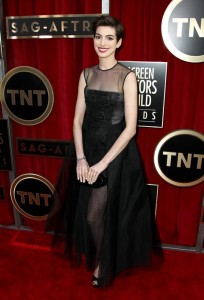 Anne Hathaway and Hugh Jackman are introducing their film Les Mis. Hugh’s got a beardee. It’s half beard and goatee. Too small to be one and too large to be the other. Also, he’s got a plug of hair sticking up. And she is still in a dress that looks like a prom dress gone transparent. BTWs, she’s too skinny and pale. She’s not Fantine anymore, hello. Throw the girl a Twinkie someone!

Alec Baldwin comes out to give the lifetime achievement award to Dick Van Dyke. He is so talented. They show a video of Van Dyke from way back in the radio days and early, early TV days. They run the gamut of his career which is uber-impressive. He looks great – very spry – then again, his wife is 40 and he’s 86… Van Dyke’s speech is very clever and well received. His wife is in purple – she’s flaunting cleavage and looks like she had the Twinkies that Anne Hathaway needed. She’s a curvy normal looking woman – older men love their curvy gals, right?

Amy Poehler and Neil Patrick Harris are the next presenters. She’s in an LBD with a little bit of sparkle. It’s okay. Compared with some of the other junk I’ve seen, it’s positively striking. Best actor in a drama series – Steve Buscemi (Boardwalk Empire), Bryan Cranston (Breaking Bad), Jeff Daniels (The Newsroom), Jon Hamm (Mad Men) and Damian Lewis (Homeland). The winner is… Bryan Cranston!! Ben Affleck gives him a nice huggy on the way up. He’s in a beautiful suit with a standard tie. All the men so far (except JT) have looked smashing. 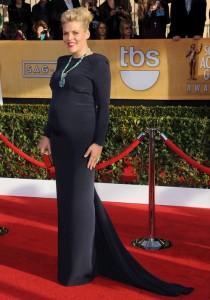 Taye Digg and Busy Phillips are the next presenters. She is glowing and nicely rounded with a burgeoning baby bump. Her dress is lovely and her necklace is beautiful – makes the outfit. Actress in a drama series – Claire Danes (Homeland), Michelle Dockery (Downton Abbey), Jessica Lange (American Horror Story Asylum), Julianna Margulies (The Good Wife) and Maggie Smith (Downton Abbey). The winner is… Claire Danes. She’s in black (who isn’t?) but it’s a stylish one shoulder number with a high leg slit with a cool embellishment.

Jessica Chastain comes out to introduce the montage of actors that died since last year’s show. BTWs she’s in a red dress that makes her look way hippy. The notable deaths shown are Larry Hagman, Whitney Houston, Jack Klugman, Michael Clarke Duncan, Davy Jones (love him), Phyllis Diller, Richard Dawson, Dick Clark, Andy Griffith, Ernest Borgnine and Sherman Hemsley. Guess he really did move on up to that deluxe apartment in the sky…

Alfred Molina and Sigourney Weaver are the next presenters. She’s in a shapeless black sack – where’s Gozer the Gozerian when you need him? Drama ensemble – Boardwalk Empire, Breaking Bad, Downton Abbey, Homeland and Mad Men. The winner is… Downton Abbey. I have really got to give that show a go. I keep putting it off. So here come the Brits to the stage. Michelle’s got a huge amount of side boob on display. Sophie’s a mustard yellow number that looks like it was made from fancy hotel drapes.

Lincoln. She’s in a beautiful orchid colored gown and he is a God – he is yummy in a suit. Love me some Day-Lewis. Lincoln wasn’t a bad guy, but Daniel is a glorified hunk. Sigh…

Robert De Niro is presenting best actress. Jessica Chastain (Zero Dark Thirty), Marion Cotillard (Rust and Bone), Jennifer Lawrence (Silver Linings Playbook), Helen Mirren (Hitchcock) and Naomi Watts (The Impossible). The winner is… Jennifer Lawrence. Yeah! You know, I just realized her dress is midnight blue, not black. And now that I see the fishtail at the back, I like it better. I also like it better compared to some of the other fashion disasters I’ve seen since she first took the stage. Jennifer looks fresh and beautiful.

Viola Davis is in a jewel-toned off shoulder number with contrasting coral earrings. Beautiful. She’s presenting best actor – Bradley Cooper (Silver Linings Playbook), Daniel Day-Lewis (Lincoln), John Hawkes (The Sessions), Hugh Jackman (Les Mis) and Denzel Washington (Flight). The winner is… Daniel Day-Lewis. Man candy alert! He’s the ultimate silver fox – can’t get enough of him. If you’re a Daniel fan and haven’t seen it, go back and watch The Unbearable Lightness of Being. It was one of his early movies from the late 80s. He was gorgeous then and now.

Jude Law is presenting outstanding cast in a movie. Silver Linings Playbook, Argo, Les Mis, The Best Exotic Marigold Hotel and Lincoln. The winner is… Argo!! Affleck is so cute. Victor Garber is there with his one mutant ear. Affleck gives an impassioned speech to a standing o! And the Academy snubbed him… bastards!

And that’s the last award! And here are my views on best and worst dressed: 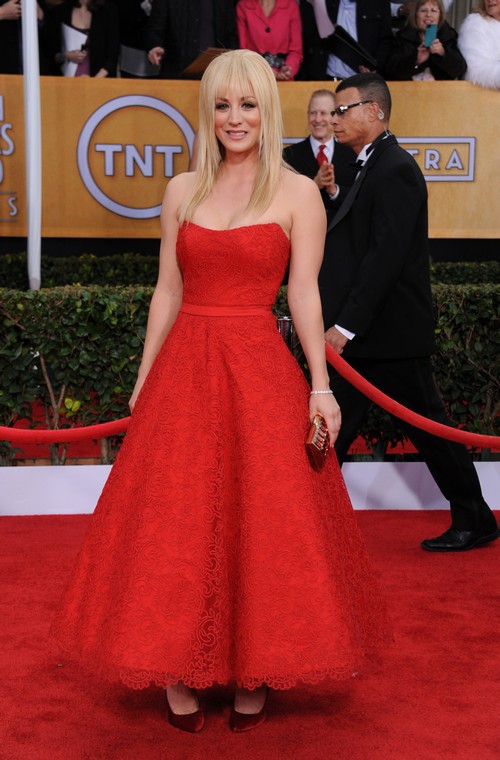 Worst dress – Julianne Moore in a black and white baggy, saggy terror tied with January Jones black dress with a lobster bib (or is it a dickie?) – atrocious either way! 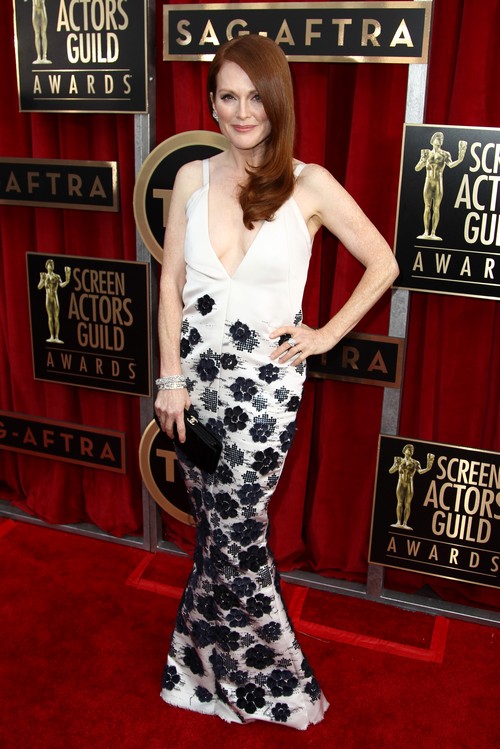 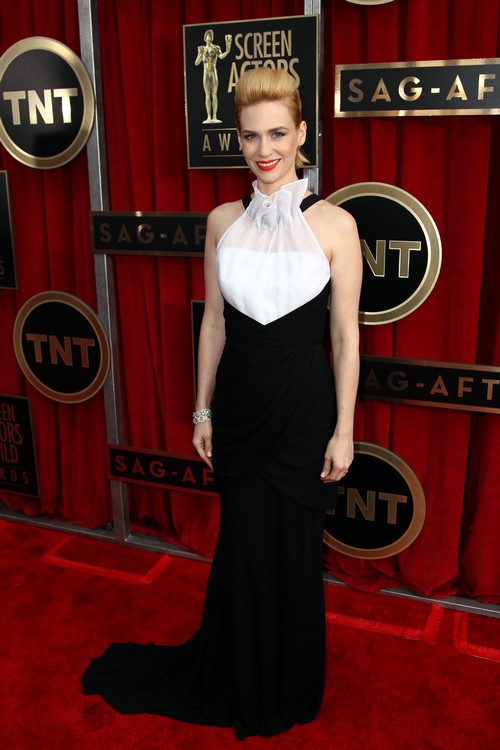