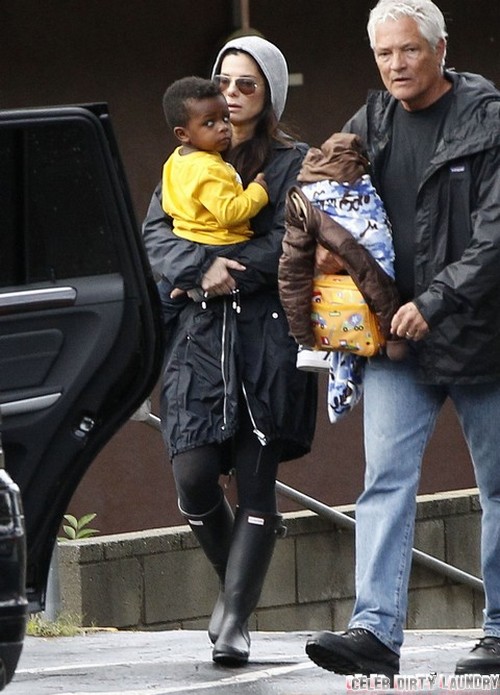 Okay this is getting more than a little weird. I’m talking about the relationship between Sandra Bullock and her top notch body guard Peter Weireter. Lots of rumors have been circulating recently about just how close the two really are because Sandra’s three-year old son now calls Peter daddy. The former SWAT Officer is supposedly happily married but he and Sandra are still raising eyebrows.

According to the July 15th print edition of National Enquirer Sandra has given Peter a very special gift- she has helped him secure roles in films beside herself and the likes of Tom Cruise. Supposedly the body guard has always wanted to be on camera and so Sandra has made that happen for him as a thanks for all that he does for her and Louis.

Sandra is supposedly torn because she knows that she could get him more screen time but in doing so it tears him away from her and he is like family so she hates to have him gone. There have been endless rumors about Sandra being in love with Peter and the possibility of an affair happening behind closed doors. Do you think she would really cross that line after being the cheated on wife of Jesse James for god knows how many years? Would that situation resonate differently if Sandra found herself as the other woman?

How do you think Peter’s wife feels about another woman’s child calling him daddy? Does she feel bad that Louis is in need of that role model or does she support her husband being so active in the boy’s life? Do you think that she trusts Sandra with her husband or is she just as suspicious as the media seems to be lately? Tell us your thoughts in the comments below!