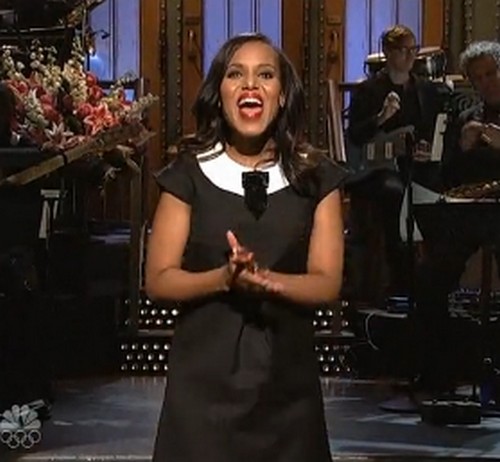 Millions of viewers tune in each week to watch Kerry Washington put on a white suit, grab a wine glass and morph into Washington DC’s top fixer, Olivia Pope on ABC’s smash hit show, Scandal. What viewer’s of last nights’ Saturday Night Live learned is that the Scandal fans are absolutely right to invest in Kerry each week because she is a damn good character actress. SNL really put her versatility to good use and this was probably the best episode since Justin Timberlake hosted months ago.

Kerry proved that she can do it all and had no problem making fun of the fact that SNL has no black female comedian on their roster, leaving her to play Michelle Obama, Oprah and an off-camera Beyonce all in under 4 minutes. The clip that immediately went viral was SNL’s take on What Does The Fox Say. Kerry played a chick that caught her man cheating and What Does My Girl say was born.  Kerry was knee deep in the song and dance reboot which was beyond hilarious. Several moments reminded viewers that as fabulous as Kerry is as a serious dramatic actress, she can do more. Girlfriend is hilarious and threw herself into every three minute crazy character with the same investment that she gives Scandal each week.

Did you guys tune in? If not catch some of the highlights right here. Aside from the Fox spoof I also loved Miss Universe. I feel like I have dealt with Miss Uganda at some point in real life and the fact that Kerry managed to stay in “Who is what?” character while a few around her crumbled made it all the funnier. Check out the clips and tell us your thoughts on Kerry’s SNL performance in the comments below!